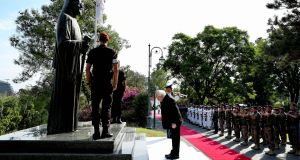 Cyprus president Nicos Anastasiades pledged to do everything in his power to “protect the Irish Border, the single market and the Irish peace process” when he met President Michael D Higgins in Nicosia on Monday.

He was speaking at a press event during the first day of the President’s State visit to Cyprus.

Earlier the President laid a wreath at a statue of Archbishop Makarios, the country’s independence leader and first president.

Mr Higgins walked with his host, president Anastasiades along the traditional red carpet through the central arch of the palace portico scarred by bullets when Athens-backed coupists stormed the palace on July 15th, 1974, precipitating the Turkish invasion and occupation of the north which has divided the island for 45 years.

Following a tete-a-tete discussion on the ramifications for the two island states of Britain’s exit from the European Union, migration, climate change and strengthening bilateral relations through trade, tourism, and the challenges posed to mass migrations, the two men spoke to the media waiting in the garden outside the palace, which had been Government House when Britain ruled the island.

During the press event which was also attended by Sabina Higgins, Minister for Justice Charlie Flanagan, and the Irish delegation, President Anastasiades spoke of the close ties between Ireland and Cyprus forged by their common independence struggles against Britain and their mutual commitment to strengthen ties and co-operate within the European Union.

He expressed his hope that the coming EU summit will send a strong message to Turkey about its maritime incursions into Cyprus’ territorial waters with ships exploring and drilling for natural gas.

President Higgins said his visit, the first by an Irish head of state since his predecessor Mary McAleese came to Cyprus in 2006, “provides an opportunity to reaffirm the strong historic friendship between Ireland and Cyprus, two island member states of the European Union with relatively small populations” at opposite ends of the bloc. He pointed out that the visit coincides with a “critical moment” in negotiations over Britain’s exit from the EU.

He promised to support all Cypriot efforts to reunify the island and expressed the hope that an “honourable, balanced, and durable settlement” can be found “that will ensure peace and stability for Cyprus through the establishment of a bi-communal, bi-zonal federation.”

En route to meetings with UN peacekeepers and police he had an opportunity to view a wide sector of the UN-controlled buffer zone that divides the republic from the Turkish-occupied north. This is no-man’s land of tall grass burnt brown by the summer sun, scrub, and narrow winding roads with occasional glimpses of the blue Kyrenia range and the huge images of the flag adopted by the breakaway Turkish Cypriots and Turkish star and crescent planted on the slopes of the mountain.

At the headquarters of the UN peacekeepers, President Higgins was greeted by Commander Maj Gen Cheryl Pearce. The current force is now 802 soldiers strong. Ireland has played a major role here since the inter-communal troubles of 1964 and contributed troops until 2005. An Garda Síochána officers have been posted here since 1993 and generally spend a year here serving at various positions. There are a dozen Irish members of the 69-member police force. Chief Supervisor Dongxu Su, from China, told The Irish Times that it deals with crime in the buffer zone, particularly attempts by smugglers to guide migrants passing through the Turkish-held area to the republic where they can claim asylum.

During a meeting with gardaí and their families, President Higgins paid tribute to the work done by UN peacekeepers who have to respond quickly and with understanding of conflict situations. He said soldiers who go back to their home communities spread the word about “not just about the importance of peace, but how slow it is to build peace and how precious it is to retain peace.”

As it is President Higgins’ first visit to Cyprus he will tour sites of historic interest, including the archaeological site of ancient Kourion and the picturesque hill village of Lefkara, famous for its embroidery since the time of Shakespeare as well as for intricate silver work.

The presidential party will depart for a State visit to Lebanon following meetings in the city of Larnaca where Mr Higgins will meet members of the consortium involved in developing the Cyprus Marine Institute and representatives of the environmental grouping AKTI and of Cyprus Airports Duty Free, all organisations with Irish connections.