New plaques celebrating Yeats, ‘The Kasbah’ and Ó Conaire to be unveiled in Galway city 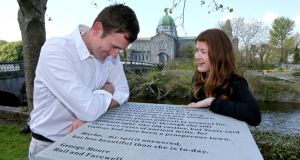 Galway city’s association withWB Yeats and George Moore and an infamous late-night crubeen cafe known as ‘The Kasbah’ have been commemorated with two new plaques as part of the Cúirt International Festival of Literature.

Three plaques in all – the third to Pádraic Ó Conaire – will be unveiled during the five-day event, extending the city’s existing literary trail.

A tribute to the late writer Dermot Healy, an exploration of new voices in British poetry and a literary lunch will also take place, along with kitchen readings, masterclasses and the “labs” youth programme.

Yeats, Moore and Martyn went for a stroll and found themselves on the bridge.

The text on the plaque is an extract from Moore’s memoir Hail and Farewell about the evening: “On the other bank there were waste places difficult to account for, ruins showing dimly through the soft diffused light, like old castles, but Yeats said they were the ruins of ancient mills, for Galway had once been a prosperous town.

“Maybe, my spirit answered, but less beautiful than she is to-day.”

Nora Crubs, a one-time Quay Street venue also known as ‘The Kasbah’ and immortalised in verse by poet Gerard Hanberry, was the subject of the second plaque, unveiled yesterday at Tigh Neachtain’s pub.