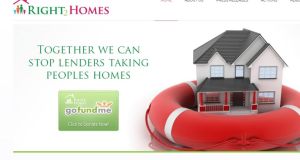 The Right2Homes group was set up when it emerged more than 110,000 families were in financial distress over their mortgages, and almost 40,000 repossession applications are currently being processed by the main banks. Photograph: www.right2homes.com

A constitutional challenge to the legal measures used by banks to ease repossession of homes is being funded by a group of individuals known as Right2Homes, using a crowd-funding initiative.

The group, co-founded by Malahide businessman Brian Reilly, was set up when it emerged more than 110,000 families were in financial distress over their mortgages, and almost 40,000 repossession applications are currently being processed by the main banks.

Right2Homes, which says it is committed to supporting legal initiatives to oppose repossessions, has already set up a crowd funding initiative to back the challenge of Darcy v the Minister for Justice and the Attorney General.

The case challenges what Right2Homes describes as “the retroactive nature” of the Land & Conveyancing Law Reform Act 2013.

Right2Homes claims the Conveyancing Law was enacted by Government to circumvent the Justice Dunne ruling of 2009 which effectively prevented the banks from seeking possession of family homes.

The Constitutional barrister and dean of Griffith College, David Langwallner, is leading the legal team assembled to take the challenge and a website right2homes.com has been set up alongside a Facebook page called Right2Homes and both include the link to gofundme.com/right2homes

According to Mr Reilly people in financial distress want to safeguard their homes “but no single family can afford the cost of legal challenges at that level”. “People don’t have to give €100, a few euro will help.”

He said the campaign has already raised €10,000 to pay for stages of the legal work and the site indicated this week that a further €3,000 has been raised in a month towards the next €10,000 instalment of the legal bill.

Mr Reilly said the 2013 Conveyancing Bill was passed by TDs who may have believed they were safeguarding people’s homes, but whom he says were simply voting in swifter access for the Banks.

Ultimately he says blocking the banks’ access to people’s homes will force the banks to deal realistically, to negotiate and settle with their debtors, many of who would never be able to pay off the full loan in any case.

Mr Reilly said the charities were currently dealing with an overwhelming number of families in danger of losing their homes -“about 80 a month” in one charity alone. But he said this was little compared to the “tsunami” of cases in the pipeline.

“Our aim is primarily to help keep people in their homes, and a successful legal challenge to the Constitutionality of that Act is, we believe, one of the best ways to help achieve that.”

“This challenge is alive and kicking and people need to get behind it as soon as possible before tens of thousands of homes are effectively ‘sleepwalked’ into the hands of financial institutions whose only concern is the immediate satisfaction of their own shareholders,” he said.