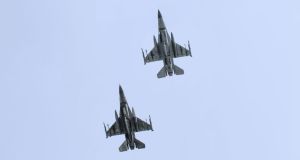 A low-level fly-past at Croke Park by two US fighter jets ahead of a game of American football on Saturday left locals covering their ears and attracted complaints from anti-war group Afri. The two F16s passed over the stadium just before the game started at 1.30pm between the University of Central Florida Knights and Penn State Nittany Lions.

The roar of the jets as they flew below heavy cloud caused car alarms to go off, dogs to howl and people to run from their homes. Locals were relieved when they realised the cause of the sound. No advance warning had been given.

Afri spokesman Dr Iain Atack asked who gave consent for “this invasion of Irish air space by elements of the US war machine”.

The Irish Aviation Authority said a request was made to it to allow the fly-past. A spokesman said it was assessed from a safety perspective and then approved by the authority.