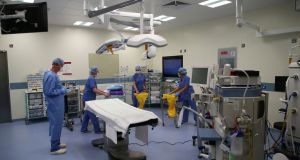 Staff at the Blackrock Clinic this month. The temporary State takeover of private hospitals has been criticised over costs. Photograph: Nick Bradshaw/The Irish Times

The Government has paid out €112.4 million to private hospitals so far for access to their facilities and staff during the Covid-19 crisis, the Department of Health has said.

In a statement on Saturday it said the payments were based on cost estimates provided by private hospitals for the period from the beginning of April up to the first week of May.

The Department of Health described the amounts provided to the hospitals as “advance payments”. It said actual costs were subject to verification.

The Department of Health signalled the Government would not be publishing details of payments to individual hospitals under its agreement as these were considered to be commercially sensitive and covered by a confidentiality clause.

The Government effectively took over nearly 20 private hospitals at the beginning of April to provide additional capacity ahead of an anticipated surge in demand due to Covid-19.

However, the deal has been criticised over its cost and because significant numbers of beds in private hospitals remained unused.

Private sector consultants have maintained they have been effectively shut out of the hospitals they normally practise in and that this has affected patient care.

The Government has to inform private hospitals by the end of May whether it wants to extend the agreement until the end of July.

A HSE review into the operation of the private hospital agreement is underway. Any extension will have to be agreed by the Minister for Public Expenditure Paschal Donohoe.

In its statement on Saturday, the Department of Health said: “Under the agreement with the private hospitals payment to them will be on a cost only open book model whereby the hospitals will be reimbursed only for the operating costs properly incurred during the period.

“The costs that will be covered will be limited to normal costs of operating the hospital. The final cost will be verified by independent firms of accountants appointed by the HSE and the private hospitals and there will be an arbitration mechanism in place in the event of any disagreement.”

The Department of Health said under the arrangement a participating private hospital was due 80 per cent of its estimated monthly costs in advance from the HSE.

“Actual costs incurred are subject to verification, as set out above and any difference is subject to a balancing payment or clawback in the subsequent month. The HSE has made advance payments for April totalling €90.2m and €22.2m in the first week in May.”

“This is based on estimates provided by the participating hospitals and will be adjusted based on verified actual costs validly incurred over the period.”

The department said the Minister for Health Simon Harris intended to bring a memorandum to Cabinet next week regarding the future of the private hospital arrangement.