Unity vote would be a mistake due to divided peoples and Brexit impasse, says Tánaiste 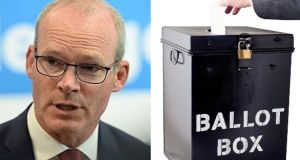 Simon Coveney: Border poll not appropriate at this difficult time.

Sinn Féin calls for a Border poll within five years have been rejected by Tánaiste Simon Coveney.

The Tánaiste warned that such a vote would compound existing tensions in Northern Ireland without Brexit being resolved. He said the Government is already working hard with both communities on Brexit without running the risk of a Border poll adding to polarisation between nationalists and unionists.

“I think calls for Border polls when we haven’t resolved the Brexit issues are not a good idea. I have said that many times, I think there is enough tension in Northern Ireland right now,” he said.

“There is enough polarisation between nationalists and unionists without adding calls for Border polls to be pulled into the middle of all that. We have enough to do to settle the issues relating to Brexit for Northern Ireland.”

Mr Coveney was reacting to the call from Sinn Féin leader Mary Lou McDonald’s at the party’s ardfheis at the weekend for the Government to convene an All-Ireland forum and hold a poll on Irish unity within five years.

“Let the message to go loud and clear to Government Buildings in Dublin and to No 10 Downing Street that this new decade is the one in which we will finally end partition to achieve a new united Ireland,” she said.

“The Government must convene an all-Ireland forum to map the transition to a united Ireland, to involve all the people, to plan for our economy and our public services and then the referendum must happen in the next five years.”

Ms McDonald said the days of partition “are numbered” and that “change is in the air” as a result of Brexit.

But Mr Coveney said the fact Brexit has not yet been resolved was all the more reason that a Border poll should not take place within the next five years as the Government continues to work to find a resolution to the Brexit issue.

“We need to work with all parties and we need to work as two governments to try to ensure we protect the institutions of the Good Friday agreement through the Brexit process and out the other side. That is challenging.”

Mr Coveney said that the people of Northern Ireland have been suffering for the past three years without a government and his focus, once the British general election is over, is to try and get an executive back up and running.

“I hope there will be an appetite in Sinn Féin and the DUP and the UUP and the SDLP and the Alliance and the others to work with the two governments to make that happen sooner rather than later,” he said.

No coalition with Sinn Féin

Meanwhile the Tánaiste also backed Secretary of State for Northern Ireland Julian Smith after he pledged to hold elections to the Stormont Assembly in January if the parties fail to reach an agreement to restore the Assembly.

“I think what Julian has been saying . . . [is] there are few options when [the] legislation runs out and one of those is an Assembly election which I think is a likely outcome beyond January 13th if we can’t put devolved government in place by then.”

Mr Coveney said that there will huge pressure on both the political parties in Northern Ireland and the governments to get the Assembly and devolved government back in place by January 13th.

Asked about Ms McDonald’s comments that the party wants to be in government in the Republic, Mr Coveney dismissed Fine Gael going into coalition with Sinn Féin.

“No, we have made it very clear that we don’t think Fine Gael and Sinn Féin are compatible Government partners. So I think the answer to that [coalition with Sinn Féin] is a very emphatic No!” he said