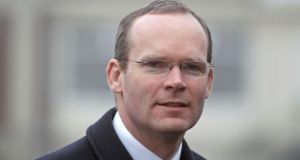 Simon Coveney: “If the owners of this vessel are abiding by the rules they should have no issue with observers.” Photograph: Dan Sheridan/Inpho

Minister for the Marine Simon Coveney has sought to assuage concerns about the recent arrival off the west coast of one of the world’s largest supertrawlers, which was expelled from Australian waters under pressure from environmental and fishing industry groups.

However, the Irish Whale and Dolphin Group (IWDG) has added its voice to concerns expressed within the fishing industry over the activity of the 9,500-tonne vessel, which is operated by the Dutch multinational that also owns the former Irish-owned Atlantic Dawn.

Speaking at the annual Skipper Expo in Galway at the weekend , Mr Coveney said that if the FV Margiris was abiding by all regulations, there was “very little” that the authorities could do.

However, he said it had not as yet been inspected by the Naval Service at sea.

Earlier this week, Australian prime minister Tony Abbott pledged that a two-year ban on the FV Margiris would remain in place.

“When a vessel of that size with the capacity for catch that it has comes either into, or close to, our waters, we take note of that,” Mr Coveney said in Galway.

Mr Coveney cautioned it would be “unfair” to focus on one vessel, but said “if it is breaching the regulations, we will enforce the rules strictly, if we need to”.

The first phase of a new ban on discards in EU waters comes into force next January, he noted, and two new Naval Service vessels would be arriving at Cork harbour in the next 12 months.

However, former sea fishery officer Kevin Flannery said he believed Mr Coveney could authorise officers from the Sea Fisheries Protection Authority (SFPA) to spend time as observers on board the vessel.

“The Naval Service can’t tell what’s inside a ship like that when it is freezing fish on board,” Mr Flannery said. “If the owners of this vessel are abiding by the rules, they should have no issue with observers on board.”

The IWDG also said it believed vessels of this size, which had the capacity to cause large numbers of “by-catch” or accidental catch of dolphins in gear, should be monitored as required by EU legislation.

It said that a peak in strandings of common dolphins off the Irish north-west coast last year was caused by fisheries “by-catch”.

“Failure to manage by-catch in these fisheries is in contradiction of the EU Habitats Directive, which affords all cetacean species strict protection within our 200 nautical-mile exclusive economic zone,” the IWDG said.

Mr Coveney, who marked the 50th anniversary of The Irish Skipper magazine in Galway, appealed to the fishing and fish farming industries to undertake safety training with Bord Iascaigh Mhara(BIM).

Mr Coveney also said he wished to issue a reassurance in relation to the proposed Galway Bay fish farm project that he was “going to make no decision that it is going to result in any environmental danger in Galway Bay”.

“This is a beautiful part of Ireland; we need to balance the responsibilities around marine tourism, around protecting ecosystems and around potentially providing commercial opportunity from salmon farming,” he said.

“But I can assure you that we are not going to rush a decision here and we will make decisions that are consistent with the detailed scientific advice that I will have available to me,” he continued, adding this advice could still take “some time”.

Coronavirus: 396 more cases as public is urged to help protect ‘older and vulnerable’ 17:50
Coronavirus: Germany and Iceland look set to be taken off ‘green list’ 17:36
The Sack of Balbriggan: The burning of a town that shocked the world 100 years ago 14:38
Motorcyclist (50s) seriously injured in crash in Co Carlow 13:38
Civil War rape which led to pregnancy recalled in new TV documentary 11:54

1 Coronavirus: 396 more cases as public is urged to help protect ‘older and vulnerable’
2 Lockdown measures and rising anger in Madrid as Covid takes hold again
3 The Sack of Balbriggan: The burning of a town that shocked the world 100 years ago
4 Coronavirus: Germany and Iceland look set to be taken off ‘green list’
5 Civil War rape which led to pregnancy recalled in new TV documentary
Real news has value SUBSCRIBE