Coronavirus: Traffic out of Dublin drops as gardaí set up hundreds of check points

Operation Fanacht impacting on travel from east, but many left Dublin earlier this week 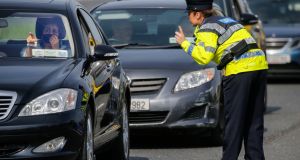 Traffic on all the main routes out of Dublin has dropped over the last 24 hours suggesting that a major Garda operation to deter people from going to holiday homes is having some effect.

A significant Garda operation involving 2,500 officers at hundreds of check points around the country is in place in a bid to deter people from travelling to holiday locations for the Easter weekend.

On Wednesday the Garda was given sweeping new powers to enforce Government restrictions due to concerns that there was some slippage in the public adherence to the restrictions.

These include a fine of up to €2,500 and up to six months in jail for those who ignore a Garda instruction to return to their place of residence.

Overall traffic leaving the east coast earlier this week was about 5 per cent above recent, post-coronavirus levels. This lasted until Wednesday when gardaí revealed the extent of the crackdown.

By 10am on Friday the numbers of cars on all routes had fallen significantly.

However, the Garda said despite the presence of some 2,500 gardaí at checkpoints on roads across the State, some of which are operating round-the-clock, some motorists were taking advantage of reduced traffic and near empty roads to travel at speeds of up to twice the legal limit.

The Garda Operation is in response to restrictions imposed by Government following the Covid- 19 outbreak.

The restrictions stipulate that people should not to make any journeys except to travel for essential work, attend medical appointments, shop for essential food, medicines or household supplies and to provide vital care for family members.

Apart from this, all journeys more than 2km from home should be avoided.

Health Minister Simon Harris has raised concerns about a possible surge in patients later this month if people from the east of the country - where there are most confirmed cases of coronavirus - decide to travel to the holiday homes elsewhere on the island for the Easter weekend.

The Garda operation - Operation Fanacht - runs until Monday and in addition to roads policing it has involved gardaí visiting parks, beauty spots, mountains and beaches.

On Thursday afternoon members of the Garda Water Unit visited Terryglass in Co Tipperary to advise locals that not just boating but fishing and a range of waterside pursuits should be postponed.

Deputy commissioner John Twomey said it was “vital” that compliance with the restrictions continues over the coming days and over the weekend.

A direction was issued to every Garda superintendent on Wednesday, a day after gardaí were granted sweeping new powers to arrest and prosecute people failing to comply with travel restrictions designed to stem the spread of coronavirus.

It instructed front line gardaí to utilise a four-step “graduated policing response”, engaging with transgressors, explaining the rules, encouraging them to obey and the final step being enforcement.

Traffic counters on the main roads between 9 am and 10am on Friday morning showed numbers of vehicles approaching Gorey, Co Wexford were down from 879 a week previously to 744. Further north on the N11 south of Kilmacanogue the numbers had fallen by about 7 per cent in the hour to 10am.

At Blanchardstown the number of vehicles heading out of Dublin on the N3 were 1575 in the hour to 10 am a week ago to 1,381 this morning.

Google traffic reported heavy congestion on the N11 near Kilmacanogue, likely caused by the presence of a 24-hour Garda road checkpoint.

‘The pint man is back’: Belfast pub resumes delivery service after legal challenge 17:52
Woman loses damages claim over BreastCheck screening 17:09
Private hospitals ‘takeover’ by State will not be extended past June 16:52
Covid-19: Between six and 12 per childcare ‘pod’ when sector re-opens 16:25
Taoiseach has confirmed schools will reopen at the end of August 16:14

1 Taoiseach has confirmed schools will reopen at the end of August
2 Garda to scale down Covid-19 enforcement for June bank holiday
3 Minnesota police release CNN reporter arrested live on air
4 Covid-19: Between six and 12 per childcare ‘pod’ when sector re-opens
5 What exactly will happen in phase two of easing restrictions?
Real news has value SUBSCRIBE