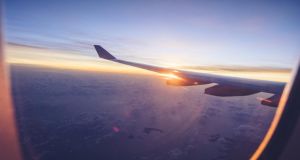 Many airlines have been accused by passengers and travel agents of withholding refunds. Photograph: Getty

Long-standing rules governing air passengers’ rights look set to be shelved at least temporarily as Minister for Transport Shane Ross considers giving the green light to plans that would allow airlines to issue vouchers instead of refunds when flights were cancelled.

His department is assessing proposals to help travel agents and tour operators during “these exceptional times”, a spokesman said.

Mr Ross has asked for a set of measures that he hopes will alleviate the financial pressures on companies, to protect jobs and businesses. Among those measures is the use of vouchers or credit notes for customer refunds.

“The Minister fully appreciates the particular financial difficulties being experienced by travel agents and tour operators from the unprecedented level of cancellations and the challenge for those companies in securing cash refunds from suppliers to pass on to their customers,” the spokesman said.

“Options under consideration include, as a temporary measure, the use of vouchers or some form of credit note for customer refunds in a way that does not materially erode consumer rights. The challenge is in finding a fair and commensurate response to what is a unique set of circumstances.”

Long-established regulations make it clear that, when flights are cancelled, passengers must be offered the choice of a refund, a rerouting at the earliest opportunity or rerouting at a later date. Many airlines have been accused by passengers and travel agents of withholding refunds in recent days and instead offering vouchers or the opportunity to rebook flights for a later date without incurring booking fees, which runs contrary to the Europe-wide EU261/2004 regulation.

The British consumer group Which? has warned that decades-old passengers’ right are in danger of being overturned. As recently as last week the European Consumer Centre, which polices consumer rights across the EU, stressed that irrespective of what passengers had been told, airlines are “obliged to respect passenger rights, which remain unchanged even under such extraordinary circumstances as the Covid-19 restrictions”. It said people were entitled to refunds if flights were cancelled.

Reacting to the latest moves by the Department of Transport, the chairman of the Irish Travel Agents’ Association, Pat Dawson, said that the “devil is in the detail” and that any new measures “must work for the customer as well as the trade to keep them viable”.

The Irish Hotels Federation said hoteliers were now making cash flow projections to their banks. “They need to know that there will be a waiver of local authority rates, what supports on interests might look like, what any relief on PRSI would look line and a zero rate of vat”. He said the industry could play a huge part in the recovery but “help is needed now not in six months time”.

The International Air Transport Association, the trade association of the world’s airlines, has calculated that airlines will see a $252 billion loss of passenger revenue should the severe travel restrictions last for up to three months. The fall in demand is forecast to be deepest in the second quarter ending in June with the number of airline seats into Ireland dropping by about 85 per cent.