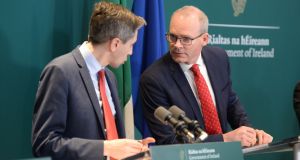 Tánaiste Simon Coveney with Minister for Health Simon Harris. Mr Coveney has said more funding will be available for those affected by the coronavirus outbreak in Ireland. File photograph: Dara Mac Dónaill

Tánaiste Simon Coveney has denied the Government is failing to take help offered by the Chinese government and said €200 million will be spent on personal protective equipment from that country.

“Just to give you an example of what we’re doing with China, and by the way we’re working with lots of other countries at the moment, but in terms of China, we have a contract now to spend over €200 million on personal protective equipment that’s going to come from China,” Mr Coveney said. “Aer Lingus have been hugely helpful. They’re going to fly flights between Ireland and China to bring that equipment here in the coming weeks.

“We’re close to an agreement to get 100,000 test swabs from China a week for the weeks that are coming up. Yesterday I had a long conversation with Chinese Ambassador. I’m likely to have a phone call with my counterpart, the Chinese foreign minister, in the next 48 hours in terms of what else China may be able to do as a country that understands this virus better than anybody else. And as a country that has huge resources that can help us.

“So I can promise you this: pride isn’t going to get in the way of Ireland seeking help from abroad, if and when we need that. But of course that is going to be on the advice of Paul Reid [the HSE chief executive] and the CMO and others who are putting our health response and logistics in place to effectively double the size of our health service in the space of a few weeks.”

Mr Coveney also said the government will introduce a significant financial package next week for those who have lost their jobs due to coronavirus-related disruption and others at risk of becoming unemployed.

The Government had previously set aside €3 billion in emergency funding to deal with the fallout from the pandemic but now accepts this is insufficient.

There have been 785 confirmed cases and three deaths so far from the virus.

The initial €3 billion in funding was allocated to boost sick pay for workers impacted by the virus, fund the health service and offer assistance to businesses.

It also provided for a €203 weekly payment for employees and self-employed people who have lost their jobs or had hours cut.

The Government said that 58,000 people had already claimed the payment by Wednesday, just three days after its introduction following the closure of schools, childcare facilities and pubs. A huge number of restaurants and retailers followed suit voluntarily. An estimated 140,000 people have lost their jobs with fears that up to 400,000 could be out of work shortly, due to the impact of the crisis.

Minister for Finance Paschal Donohoe has said that for many people the €203 per week pandemic unemployment payment is not enough “and we need to consider that, but we need to do something really quickly for those at risk of losing their jobs”.

Ministers were working on changes to the payment over the weekend.

Other European countries like Britain and Denmark have moved to pay up to 80 per cent of the wages of staff who have either lost or are at risk of losing income as a result of the pandemic.

“I want to reassure people that the government are going to introduce a significant and supportive economic package in the coming days that will go well beyond what we have announced to date,” Mr Coveney on RTÉ’s This Week programme on Sunday.

“That will treat everybody equally, so in other words we are not going to separate the people who have lost their jobs to date from the people who may lose their jobs next week ... We want to do something that provides, if you like, a guaranteed level of income for everybody across the country.”

Mr Coveney also said any decision to further tighten restrictions on the movement of people to deal with the coronavirus crisis will be taken on foot of medical advice and not political pressure.

Mr Coveney said tighter restrictions will be imposed if required and based on advice by the chief medical officer, Dr Tony Holohan.

Ms McDonald had earlier told Newstalk radio that the situation some workers find themselves in poses a “dilemma” which needs to resolved.” - Additional reporting: Reuters