‘There are people who don’t realise they’re breaking the rules, but there are others who are just chancing their arm’ 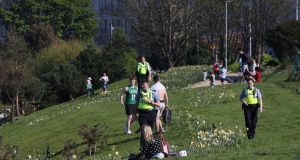 The closure of popular swimming spots including Seapoint and the Forty Foot by Dún Laoghaire Rathdown County Council this weekend did not deter sun-worshippers from making their way to the south Dublin coast.

Sunbathers could be seen dotting coastal parks from Sandymount to Sandycove but many did not get the chance to develop much of a tan as gardaí were swiftly in to move people on.

“People are allowed to take brief exercise, but sunbathing is not exercise,” a garda who was approaching people sitting beside Sandymount Strand said.

“They are mostly people in ones and twos, no big groups and mostly they weren’t aware that the 2km, is to be used only for exercise.”

Motorists along the coastal road were also turned back at Garda checkpoints for not adhering to the Covid-19 movement restrictions.

“There are people who don’t realise they’re breaking the rules, but there are others who are just chancing their arm,” a garda who was stopping motorists and cyclists on the Rock Road just outside Blackrock said.

“We’re asking them where they live, the purpose of their journey. I’ve had quite a few people say they’re just out for a spin – that doesn’t count as an essential journey.”

At another checkpoint close to the East Pier in Dún Laoghaire, a garda said people were being “very compliant” when asked to turn around.

“We had a few people saying they needed to get to Cavistons [a fishmongers and grocers in Glasthule ]. We’ve been saying if you really need to go to Cavistons, okay, but please then go straight home,” she said.

“We’ve also been telling people that the Forty Foot is closed. There had been people getting through earlier in the day, but the council have since put up more secure barriers.”

One garda on a bicycle, who was asking sunbathers to leave Sandycove Park, said he had earlier stopped a cyclist who had come all the way from Finglas.

“Even if people are coming from Blackrock, I’m telling them they are beyond their 2km limit so they need to turn around and go home. I’ve also had to tell people you can’t drive here and then do your 2km exercise, the restriction is to within 2km of your front door,” he said.

“Mostly I’m telling people here that they can’t be lounging around, or having picnics, but if it wasn’t for the sun today, this wouldn’t be happening at all.”

Elsewhere, the Phoenix Park was quieter than it had been on previous weekends during the period of movement restrictions, despite the warm weather. This was largely down to gardaí and park rangers making a concerted effort to move people on.

One senior garda managed to clear around 40 sunbathers, mostly couples, from the grass surrounding the Wellington Monument in less than 10 minutes.

“We just sat down after doing a bit of exercise,” said one of a couple asked to move said, “but no, we get it, people are getting a bit too relaxed about it, so I understand why we were asked to get up, it has to be done.”

A group of three women in their 20s, who share an apartment, had just realised they could not sunbath in the park together.

“We thought it was ok because we all live together, and we’re not close to anyone else here,” one said.

The garda clearing the park said he has had some people question why they could not lay down on the grass.

“It takes most people about 20 minutes to walk 2km, so I’ve been telling people they really shouldn’t be out of their homes for more than 40 minutes, and they can’t just lie around here all day,” he said.

“Most were fine, some asked why they couldn’t have a picnic, and why they should go home. The answer is, to save lives.”

1 Cluster of Covid-19 infections at Kerry ‘house party’ investigated
2 Coronavirus: Two more deaths confirmed amid concern over new clusters
3 Reopening of pubs that do not serve food may be delayed beyond July 20th
4 Paschal Donohoe’s victory seen as a revolt against EU’s ‘big four’
5 Man (60s) killed as other driver ‘leaves scene’ of two-car crash
Real news has value SUBSCRIBE