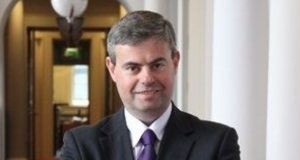 Martin Fraser (pictured), the secretary general of the Government, sent a letter to his counterpart in the Oireachtas, Peter Finnegan.

The State’s most senior civil servant has issued the Oireachtas with what is being characterised as a “gentle admonishment” to TDs over the Dáil sitting tomorrow.

Martin Fraser, the secretary general of the Government, sent a letter to his counterpart in the Oireachtas, Peter Finnegan, which has been forwarded to TDs.

Mr Fraser highlighted that “everyone in the country has been asked stay at home, subject to the limited exceptions which have been published by the Government”. He also said he is “sure” this public health advice would be uppermost in the minds of Oireachtas officials and TDs organising Dáil business.

It comes ahead of the Dáil sitting on Thursday afternoon to hear statements on the coronavirus crisis and on social protection measures. No legislation will be debated and the sitting has provoked division among some parties, with Sinn Féin and People Before Profit insisting the Dáil must meet.

Others, such as Labour, have said TDs should not gather at a time of national lockdown to deal with the coronavirus crisis. Sources described Mr Fraser’s letter as “gentle admonishment” of TDs.

Attendance at tomorrow’s Dáil session is restricted to 30 per cent of the total 160 TDs and only two people from each party and group will be allowed in the chamber at any time to ensure physical distancing.

Mr Finnegan told TDs he had received “communication” from Mr Fraser. He said, among other issues, Mr Fraser “highlights the extraordinary constraints that everyone is operating under at present”.

“He states that everyone has been asked to stay at home subject to limited exceptions which have been published by the Government. And he concludes by saying that he is sure that the public health advice will be uppermost in the considerations of the business committee at this extraordinary time.”

The business committee decides the timings and schedules of the Dáil.

In his letter to Mr Finnegan, Mr Fraser, said: “Obviously we are all operating under extraordinary constraints which I know you fully recognise.

“We will, of course, give priority to the national effort to deal with the public health emergency and to protect all of our citizens.

“In essence, everyone in the country has been asked stay at home, subject to the limited exceptions which have been published by the Government. To do otherwise is to risk the spread of the Covid-19 disease and to put fellow citizens, including those working on the front-line in our health service, at risk.

“I am sure this public health advice will be uppermost in your mind and in the considerations of the business committee at this extraordinary time.”