Coronavirus checkpoints: 'These gardaí are the first people I’ve spoken to in three weeks' 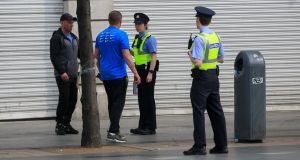 Members of the gardaí at a checkpoint on O’Connell Street, Dublin. Photo:Gareth Chaney/Collins

“Just because we’re dealing with a Covid-19 pandemic doesn’t mean everything else comes to a halt – people have hospital appointments or need to go to hospital because they have an accident – all human life is here,” according to Garda Ollie Power.

Members of the public realise that gardaí have an important part to play in curbing the spread of the virus, said Garda Power, who was manning a checkpoint on the M8 near Cork city with his colleagues Dermot Carroll, Ray O’Brien, Terence McSweeney and Mick Bohane.

They had set up a diversion in the M8 near the Glanmire turn-off, channelling all southbound traffic up the slip road where they were checking with motorists where they were travelling.

“We’re here on the slip road because not only does it slow traffic down but if we have to turn someone back, we can send them on to the roundabout here, back across the bridge and down the slip road on to the northbound lane,” he says

According to Garda Power, the vast majority of those they are encountering are local motorists heading out to do shopping or people with some other legitimate business such as delivering food to elderly cocooning relatives.

Gardaí were encountering a lot of Dairygold milk tankers and Musgrave delivery lorries but they were also encountering people with more personal reasons such as people going for cancer treatment at Cork University Hospital.

Among the many people that gardaí encountered on Sunday was an air hostess heading for Cork Airport to work a flight to London and a reporter delivering and working on a story about face masks at a local community hospital.

Also out on the road was Cian Twohig, who was driving from Dublin to Cork to help his elderly mother sort out a problem with rodents in her back garden as well as bringing her a supply of groceries as she obeys guidelines to cocoon.

“I think the government is doing a good job – this is a different country now to a month ago and this is my third checkpoint I’ve encountered today but it makes sense to check on people and ensure they only make essential journeys.

“People generally are complying with the guidelines – I’m been isolating and working from home in Dublin so these gardaí here are the first people I’ve spoken to in person for about three weeks but it’s all for the best.”

Insp James Hallahan of the Cork City Garda Traffic Corps said officers on checkpoint duty on all the main arterial routes in and out of Cork found people were largely very compliant with government guidelines.

“There is a very high compliance rate – it’s a graduated response and enforcement is only utilized as a last resort – we’ve had a few cases where we’ve turned people back but most people are complying with the guidelines.

“We would probably encourage people to shop local a bit more and we have stopped cyclists and sent them back because they’ve gone outside their 2km limit and we’ve also inspected buses to ensure everyone’s journey is essential.

“We would urge people if they have a letter from their employer, saying their work is essential, that they would have the letter ready on the seat beside them when people have to look for their letter, it is causing some delays.”