Over €2m to be spent on cycle lanes, and 14 streets to be fully or partly pedestrianised 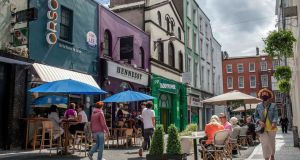 Pembroke Street in Cork, which has recently been pedestrianised as part of the Reimagining Cork City Programme. Photograph: Clare Keogh

Plans to pedestrianise significant parts of Cork City’s centre and create 4km of new cycle lanes are to be launched on Wednesday under a “Reimagine Cork” plan from Cork City Council.

The plan, which will cost €2 million for the cycle lanes alone, will be launched by the lord mayor of Cork, Cllr Joe Kavanagh, and Cork City Council CEO Ann Doherty at Cork City Hall.

The cycle lanes will run on several important arteries, such as Horgan’s Quay, Centre Park Road, Monaghan Road and Victoria Road as well as the South Mall, The Irish Times was told.

The Cork Cycling Campaign’s spokeswoman, Majo Rivas, said the lockdown highlighted how many people were happy to use bicycles to get around the city once proper facilities were in place.

“Now that more people are returning to their usual activities, it is vital that we have good connected and coherent cycling infrastructure to give them a viable alternative to public transport and private cars,” said Ms Rivas.

Saying the plan is a positive start, she said: “We want to re-imagine Cork as an equitable city where more people of all ages, genders, abilities and ethnicities can enjoy moving around our city safely and sustainably.

Justine Looney, the chair of the Douglas Street Business Association, hoped that the city council would back the locals’ call for Douglas Street to be made one-way from Evergreen Street to Summerhill South.

Following a survey, Ms Looney said “people are ready for change on Douglas Street” and want more green areas, seating for outside restaurants and planters with trees, complete with attached bike parking.

Publican Paul Montgomery, who runs Clancy’s Bar on Lower Princes Street, hoped that local pubs and restaurant will be able to have street space for outdoor dining.

“There’s a huge difference between that and pedestrianisation. It’s a different concept,” said Mr Montgomery. “It works very well in many cities in France and Italy, in particular.”