Attackers use sledgehammers and paint to deface monument 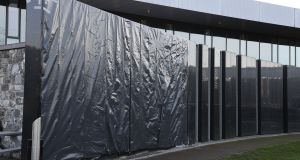 The Glasnevin memorial wall after it was vandalised again. Photograph Nick Bradshaw

Glasnevin’s necrology wall, unveiled in 2016 to remember all those who died during the Irish revolution, has been vandalised for a second time.

Intruders used sledgehammers and threw paint over the controversial memorial, which was to include names of all those who died from the Easter Rising in 1916, to the end of the Civil War in 1923. The list currently stops at 1918.*

7 Kia’s spacious Sorento is like a sittingroom on wheels

9 Wolfwalkers: Cartoon Saloon has made its best film yet

12 ‘I’m going to quarantine for two weeks, in the spare room, away from my family’

15 Covid-19: UK getting vaccine first because it is a ‘much better country’

19 Marion Davies was as big as Valentino. Then she had a scandalous affair

26 Michael McDowell: Time to wake up and smell the coffee over Sinn Féin

27 Q&A: What we know and don’t know about how Covid-19 vaccines will work in Ireland

32 Taoiseach tells EU to ‘hold the nerve’ in Brexit negotiation

33 After the vaccine, will your company want you back in the office?

34 Brexiteers line up Ireland as they play blame game

36 British readying for Brexit: They never saw it coming, mate

39 Warning that significant gaps remain in talks between Brexit negotiators

40 Netflix: 10 of the best new shows and films to watch in December