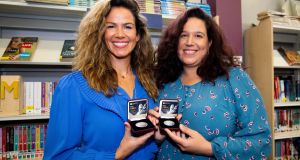 Lynott grew up in Dublin and fronted rock group Thin Lizzy, and died in 1986 aged 36.

The Central Bank has launched a commemorative silver coin to mark 70 years since his birth, as part of a series honouring Irish musicians.

Last year a similar coin was launched commemorating Rory Gallagher, with a commemorative Luke Kelly coin to be released next year.

The Phil Lynott coin was unveiled at a ceremony in St Kevin’s College, Crumlin, south inner city Dublin, the school Lynott attended as a boy.

The Central Bank is to produce 3,000 of the collectors coins, available to buy for €64.99 from Wednesday.

Speaking at the launch, President Higgins said Lynott was “not likely to be forgotten,” and it was “so appropriate” to hold the ceremony “in his beloved Crumlin”.

On the wall of his study in Áras an Uachtaráin hung a photo of Phil Lynott and Rory Gallagher performing on stage at a concert in Punchestown in 1982, President Higgins said.

For Lynott to die at the age of 36 was a “very great loss” but the musician had left “such a rich legacy” behind him, he said.

President Higgins added it was “very important that we not only protect the right to perform but the space to perform”.

Sharon Donnery, deputy governor of the Central Bank, said “Phil Lynott’s iconic status, his contribution to modern Irish music and the enduring popularity of his music is why the bank has issued a coin honouring him”.