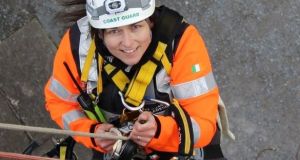 Irish Coast Guard volunteer Caitríona Lucas who died during a search off the Clare coast in September is to be remembered at a wreath-laying ceremony in Dublin Bay on Christmas Eve.

A commemoration by the RNLI Dún Laoghaire lifeboat is held annually to pay tribute to the loss of 15 of its volunteer crew on December 24th, 1895.

However, three wreaths will be cast off the Dun Laoghaire lifeboat this year; one for the 1895 crew, one for all those who died at sea in the past year, and one in memory of Ms Lucas,the first Irish Coast Guard volunteer to die during a search.

The 41-year-old mother of two, attached to the Doolin Coast Guard unit was on board Kilkee Coast Guard’s rigid inflatable boat (RIB) during a search for missing Clare teacher David McMahon, when it capsized in rough seas on September 12th.

Two investigations were initiated into the circumstances leading to Ms Lucas’s death.

Dún Laoghaire Coast Guard unit and Civil Defence volunteers will form a guard of honour at the 20-minute ceremony, involving music and an ecumenical blessing, by the east pier lighthouse at midday on Saturday, December 24th. Among those attending will be Cormac Becton, great-grandson of Edward Murphy who was one of the 15 volunteer crew who died in 1895.

RNLI Dún Laoghaire lifeboat operations manager, Stephen Wynne, said that it was an especially poignant time of year for many people who had lost loved ones at sea.

Ms Lucas “symbolises the commitment we all share for helping others in need, she will not be forgotten,” he said.

The RNLI said that contingency plans are in place in case of severe weather, in which case the ceremony may move closer to the lifeboat station in Dún Laoghaire.