Four crew attached to Rescue 118, based in Sligo, are due to receive the Fredrick L Feinberg award from the American Helicopter Society. The rescue involved hovering a half-rotor diameter’s distance from a cliff face. Video: Irish Coastguard 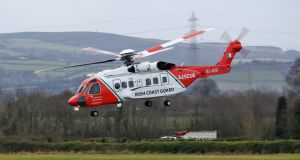 An Irish Coast Guard search and rescue helicopter crew is to be given a prestigious international award this week for “exceptional performance” in rescuing an injured climber.

Four crew attached to Rescue 118, based in Sligo, are due to leave for Canada today to receive the Fredrick L Feinberg award, conferred by the American Helicopter Society since 1961.

Named after a helicopter test pilot, the award is given to the pilot of a vertical flight aircraft who has accomplished the “most outstanding achievement” in the preceding year.

The Sligo pilot and crew was chosen from a shortlist of 200 for the rescue in the Bluestack mountains in Co Donegal on May 15th, 2013.

The rescue involved hovering a half-rotor diameter’s distance from a cliff face for 20 minutes above a 365 metre sheer drop in the Bluestack Mountains in severe weather, with darkness falling.

Capt Paul Forbes, co-pilot Paraic Slattery, winch operator John McCartney and winchman Conal McCarron, along with engineers Francis Perris and Declan McGrath, were on duty when they were tasked by Malin Head Coast Guard to attend to a climber with a suspected broken leg.

They were flying an S-61 Sikorsky, and this was one of its last missions before being replaced by the newer S-92 model.

Wind was gusting to 32 knots, with low cloud and rain. Using an infra-red camera, the crew located the casualty at the base of a sheer cliff.

Capt Forbes and co-pilot Mr Slattery had to maintain an “out of wind” hover right up to the cliff face to try and avoid the gusts coming over the top of the peak, while the winch crew had to struggle with severe downwash from the helicopter.

There was no light from the moon or stars, so the crew relied on the hover floodlights, landing lights and torch-light from the ground to maintain a safe distance while Mr McCartney and Mr McCarron worked to immobilise and strap up the climber in a rescue basket stretcher.

The casualty, who has since made a full recovery, was taken to Sligo airport, and from there by ambulance to hospital.

The Sikorky manufacturers conferred the Sligo rescue crew with an award last year and made the nomination to the American Helicopter Society.

Co-pilot Slattery said that he and his colleagues were “delighted”, adding “it’s great to receive recognition for a job well done”.