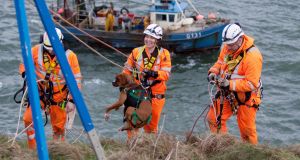 Mother-of-two Caitríona Lucas was the first member of the Doolin Coast Guard Unit to volunteer for the search mission that cost her her life.

The officer in charge of the unit, Mattie Shannon, said yesterday that he put out the call on Sunday night for members to take part in a search for missing Lissycasey school inspector David McMahon in Kilkee. Mr McMahon has been missing since last week.

He said that Caitríona was the first to confirm on the unit’s online system that she would take part “and she was there to be picked up at 9.30 on Monday morning to go to Kilkee”.

Mr Shannon said: “Caitríona was a very active member of the unit and devoted 700 hours of her life every year to the unit and I’m sure she spent another 700 hours thinking and planning about her time with the unit.”

The 41-year-old librarian with Clare County Council leaves behind son Ben (20), daughter Emma (18) and husband Bernard, who is also a member of the unit.

“They enjoyed their time with the unit and worked well together and always travelled together. He could very well have been on the boat. Anywhere you saw one, the other was there. There was no end to their ability or energy,” he said.

Two separate investigations by the Marine Casualty Investigation Board and the Irish Coast Guard are under way into the incident that resulted in Ms Lucas’s death.

She died after a rescue boat capsized and threw the three people on board into the sea off Kilkee, Co Clare, on Monday afternoon. The other two volunteers were rescued, but one of them spent several hours trapped on a ledge at the base of a cliff before being winched to safety.

Mr Shannon said that what occurred “is the worst nightmare not just for the Doolin unit but for the entire coastguard across the country”.

He said: “Everyone cannot believe it, but at the back of our minds, it is there with everyone that this could have happened at any time. We are so lucky that in the past 25 years it hasn’t happened before but that doesn’t make it any easier.”

Mr Shannon said the unit was having its busiest year this year with 57 different call-outs that have involved the recovery of six bodies.

“The more you do the more you are open to harsh environment and to danger,” he said. Mr Shannon was involved in the daring rescue of one of Caitríona Lucas’s colleagues James Lucey.

It involved Mr Shannon abseiling down the 100ft cliffs to help take the 51-year-old volunteer with colleagues to safety with the aid of the coastguard helicopter from Waterford.

Mr Shannon said that at the coastguard unit’s base in Doolin, there were poignant symbols of Caitríona’s contribution to the unit where she made replica rescue boats as part of her role as the unit’s education officer.

David’s father, ESB worker Tony McMahon, clasped a framed photograph of his missing son to his chest as he walked and thanked strangers and friends of David for taking part.

The search was yesterday aided by a drone deployed by Clare Civil Defence along the coastline.

Lahinch man Bill Slattery has been searching for David since last Saturday. A councillor for the west Clare area, Mr Slattery’s wife Noreen is David’s godmother and aunt.

“I am really lost for words over what has happened. It is a very difficult time for the McMahon and Lucas families,” Mr Slattery said.

Volunteer units were called out 1,290 times in 2015, an average of about one call out per station every fortnight.

It is perhaps remarkable given the number of incidents and the dangers involved that the death of Caitríona Lucas was the first ever involving a volunteer in the Irish Coast Guard.

How does one become a member of the Irish Coast Guard? Anybody between the ages of 18 and 65 can join, even those without any experience of the sea.

However, potential volunteers must live within 10 minutes of the nearest Coast Guard station.

Those who join the Irish Coast Guard as volunteers tend to be fishermen, sailors, ex-naval officers or operators of pleasure craft.

Applications must be given to the local volunteer officer in charge. An application to join does not necessarily mean that a volunteer will be successful.

Volunteers undergo intensive training for a year which is a probationary period. They learn seamanship, boat handling, navigation and leadership.

The training is tough and designed to cover every eventuality. What are Irish Coast Guard volunteers expected to do? Volunteers are rostered on a 24/7 basis. When on call they are expected to be available to be at their station house within 10 minutes.

Each team is trained in search skills, first aid, liaising with helicopter landing sites and a variety of maritime skills.

Other units are trained as cliff rescue units and can either respond locally or be air lifted to an incident.

There are 17 cliff rescue units across the country.

Members turn out in all circumstances and in all weathers.