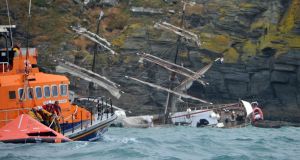 The tall ship ‘Astrid’ has been resting on rocks since it ran aground at Sovereign Rocks off Kinsale on July 24th. Photograph: Michael Mac Sweeney/Provision

Preparations to salvage the Dutch-owned tall ship Astrid from rocks off Kinsale in Co Cork are under way following approval from the Irish Coast Guard. The 95-year-old vessel ran aground at Sovereign Rocks off Kinsale last month, prompting dramatic scenes as 30 people were rescued from rough seas. The vessel has been resting on the rocks since the collision on July 24th.

Plans to retrieve the tall ship have been agreed between the Astrid’s insurers and Bere Island-based salvage experts Atlantic Towage and Marine and approved by the Coast Guard.

Time scale
“The Coast Guard has agreed the salvage plan submitted by the insurers of the Astrid – a timescale for the operation will become clearer once a start date has been finalised,” a Coast Guard spokesman said.

Specialist salvage equipment including a shear leg crane and a barge will be transported from the UK to facilitate the operation. Contingency plans submitted by the company regarding the environmental impact of the salvage operation have been approved by the Coast Guard. Company divers conducted underwater surveys of the wreck yesterday with detailed submissions to be delivered to the Coast Guard on Monday.

The operation is expected to take between one and two weeks, depending on weather conditions.

The vessel, which was built in 1918 and operated as a cargo ship until 1975, was on a 14-day voyage as part of an EU Youth in Action programme sailing from Southampton to Cherbourg via Kinsale. The Astrid departed Oysterhaven for Kinsale but lost power in stormy conditions with seven crew and 23 trainees on board.

The crew tried to raise the sails but the ship ran aground and began taking on water.