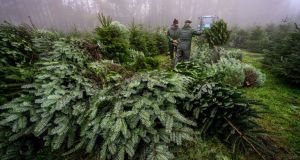 Last weekend was cited by several firms as among the busiest is many a year. File photograph: Getty

Christmas tree sales records have been tumbling countrywide as growers and sellers reported surging interest over the course of their busiest weekend of the year as people look to kick-start their festive celebrations in earnest.

Close to half a million real trees are now standing in living rooms across Ireland, according to the Irish Christmas Tree Growers – an alliance representing fir farmers countrywide.

Trevor Roper, of the Inniscarra Christmas Tree Farm in Co Cork, said he was set to double his sales this year compared to last Christmas and had had to “rope in more family to help out” over the weekend as the crowds just kept on coming.

He started selling trees almost two weeks ago as people were anxious to get going with festive celebrations to try and lift the Covid-19 gloom.

He launched a website to sell trees as part of his response to the crisis and is also offering delivery, which helped grow his business.

He said the sudden surge in demand for real trees is fuelled by a desire to have a more authentic Christmas while also supporting local businesses. And he added that there is a growing awareness of the environmental damage done by fake plastic trees and that buying the real, sustainably grown variety is more carbon efficient than an artificial tree.

“This weekend is going to be crazy,” said Mr Roper.

He said that “99 per cent of people were buying water stands which would keep their trees fresher for longer”. And he suggested people could easily get a month out of the trees they buy this weekend.

Theo Lambton established a Christmas tree delivery-and-collection service called Fir in Dublin four years ago. He said last weekend was the busiest in his company’s history.

He sources his trees in Co Wicklow and, like Mr Roper, has noticed a massive upsurge in new customers.

“Everyone has had a hard year and something like a Christmas tree can really stir up emotions in all of us,” he said.

He added that people wanted to shop local and highlighted the impact that has had on his business.

“I have 10 vans on the road delivering trees today. And there are two people in each van which means we have helped 20 people who have been out of work due to crisis earn some income ahead of Christmas.”

He also said people are more conscious of the environmental impact from plastic trees.