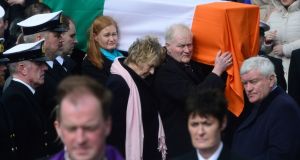 As Capt Dara Fitzpatrick’s tricolour-draped coffin was eased into the hearse after her funeral mass, a huge Sikorsky helicopter emerged from the western sky, flying low through the mist and drizzle that had enveloped Glencullen, her Coast Guard red and white livery instantly recognisable.

The chopper circled around the rear of the tiny St Patrick’s Church and then wheeled back to face, as it were, into the hearse.

And there, hovering perhaps 300 feet above the ground, her rotor blades screaming their presence, she waited and waited, seeing home her fallen colleague. The winchman’s door was slid fully open. Two crew members clearly visible from the ground stood inside, their legs splayed for balance, arms raised and holding on, and looked down.

After a minute or so of hovering, the pilot dipped the chopper’s nose in salute and, as the crowd applauded, flew off.

Top cover of a different kind - a duty the captain and crew of Rescue 117 surely wished they did not have to perform but which most assuredly they and their colleagues wanted done.

It takes a village

The village, that her sister Niamh Fitzpatrick said memorably would now raise her twice orphaned three-year-old adopted son Fionn, came out in force.

That village - Capt Fitzpatrick’s immediate family and close friends, the community of Glencullen, and a host of professional colleagues from the Coast Guard, the Air Corps and Naval Service, the RNLI and a large array of emergency first responders - was joined by the president, Michael D Higgins, to express a nation’s collective sorrow, admiration, gratitude and appreciation for a life lived bravely, to the full and, ultimately, given up in the service of others.

Taoiseach Enda Kenny was present, as was the Fianna Fáil leader, Micheál Martin, and several other politicians.

So too were Maj-Gen Kevin Cotter, deputy chief of staff of the Defence Forces, Brig-Gen Paul Fry, head of the Air Corps, Lt-Cdr Conor Kirwan, representing the Naval Service and Lt-Cdr Philip Dicker, the Officer Commanding the LÉ Ciara. The Garda Síochána was represented by Chief Supt Gerry Russell.

But it was the ordinary men and women who knew and worked with Capt Fitzpatrick, and her still missing crew from their downed helicopter, Rescue 116 – pilot Mark Duffy, and winchmen Paul Ormsby and Ciaran Smith – who came out in numbers to support her family and express their sorrow.

A narrow limestone pea shingle path leads from the road through Glencullen, which oddly enough, is designated R116. The path snakes left through a lawn of freshly cut grass and then back again to the main door into the tiny granite church.

For the funeral it was lined, shoulder to shoulder, by Coast Guard personnel, all in dark uniforms, gold buttons and white topped peaked caps. Over a dozen standing with them came from the coast guard service in Northern Ireland, from Coleraine, Belfast and Bangor.

Behind them covering most of the churchyard lawn were a range of other emergency responders - paramedics from the Ambulance Service, divers from the Garda Water Unit, fire fighters from Dublin and Dun Laoghaire, and RNLI volunteers - family members and members of the wider community, perhaps 500 people in all.

The church was filled to capacity: some 250 mourners taking every available pew, plus standing room at the rear, and spilling over into the village library next door which had seating for over 100 more.

Wind whipped through the crowd, driving drizzle before it down the valley, across the plain separating Killiney Head and Bray and out into the Irish Sea. Just before 11am, the church’s single bell began to toll, its sound carried away on the breeze.

A piper, retired Sgt Anthony Byrne of the Irish UN Veterans’ Band, led the procession with Antonin Dvorak’s Going Home. Slowly and carefully, Capt Fitzpatrick’s tricolour draped coffin, was carried by a guard of honour from the Coast Guard, including two members of the crew of Rescue 116 who were not on duty on the night of the tragedy.

They were led by Declan Geoghegan, Coast Guard manager, and a standard bearer with the Coast Guard flag dipped low.

Immediate family followed. Parents Mary Fitzpatrick and her husband John, a retired Dublin County Sheriff and returning officer of long standing; then came three-year-old Fionn, told only just before the funeral that his mother would not be coming home but, at ease like a child, seemingly oblivious to the enormity of that fact; and then her siblings Niamh, Orla, Emer and John, and members of the wider family.

Welcoming Capt Fitzpatrick’s coffin to the singing of All Things Bright and Beautiful, the chief celebrant priest, Fr Andrew O’Sullivan, said news of her death during last Monday’s late night rescue mission off the north-west Mayo coast had shocked everyone.

In his homily, he said death was not the last chapter in the human story; for Christians there was the life ever after; that did not lessen grief but it gave hope.

“Over the last few days many stories have been told about Dara and how she was a wonderful colleague and friend and indeed of the incredible professionalism and bravery of those in the coastguard and in our emergency services. How these extraordinary people put their own lives at risk in order to save others - what bravery! And they truly are heroes.

“Dara loved travelling and had so many adventures. She was not only a professional and talented pilot and excelled in what she did, but also, a great horsewoman, she loved donkeys; a hillwalker and an adventurer. Dara was quite shy and she hated ‘small talk’. She was kind to her core and a champion of the underdog. She was fiercely loyal and her family was of paramount importance to her…”

Cathal Oakes, a Coast Guard colleague, said in a eulogy it was no coincidence that Dara’s helicopter was named Queen of the Sky. She was a “consummate professional” and “carried herself with effortless style”.

The most difficult eulogy was delivered with emotion, aplomb, wit, pride and anger by Capt Fitzpatrick’s psychologist sister, Niamh.

She thanked all who had helped: the RNLI people who took her from the water, the Coast Guard colleagues who ferried her to Castlebar General Hospital and politely declined a garda offer to carry her inside saying, no, they would see her home; the hospital and mortuary staff who helped as family and colleagues sat with Dara through the night.

“These are men and women who have stood beside us and will be with us forever,” she said.

She had gone to her sister’s bedroom and seen Kanga, the soft toy kangaroo to which she was attached. On the bed was the book Dara was reading when she got the call to rush to Mayo to assist in the rescue: No Time To Say Goodbye by Linwood Barclay.

Having sat with her dead sister, she looked out the window the next morning to see shining sun and birds singing.

“Something clicked,” she said, her voice rising, “I just got so mad. The sun had come out, the birds were singing and” – her voice breaking –“I just thought ‘How dare you! How dare you do that!’ I was so angry I wanted to kick, I wanted to scream. I wanted to yell. I was so mad, just so mad. And so angry. Angry at God. How could he be so greedy? He has Dara for ever. We had her for 45 years and Fionn had her for three. . . It’s just so wrong.

“And then I stopped and I realised that the anger if I focused on it was going to keep up space in my head and stop me from seeing what was important.”

That was the bravery of her sister and her parents in letting people comfort them; and her siblings each of whom shared various of Dara’s qualities. Her sister’s resolve would carry them all through.

“That’s what I’m going to focus on - all the goodness that has come out of this; we feel so loved and so cared for, and we know that Dara is.”

She had a practical suggestion for the family, something to keep Dara’s spirit alive even though her body was no longer with them.

“When you are afraid, when you think you can’t, when you meet up obstacle, ask yourself, ‘What would Dara Fitz do? What would Dara do?’ And teach your children and use it ourselves: do a Dara on it because that will keep her with us because death is the end of a life, not a relationship.”

Capt Fitzpatrick was carried from the church by her family to the strains of the Battle Hymn of the Republic, sung by the Glencullen Church Choir under Renee Roe, accompanied on organ by Catherine Roe. Other music during the service came from flautist Mercedes Garvey, and Rebecca Murphy on harp with Emily O’Dwyer on violin who gave a rendition of Galileo by Declan O’Rourke.

When they brought her out, ready for her final journey to the crematorium at Mount Jerome and that final colleague’s salute, the sun was shining.