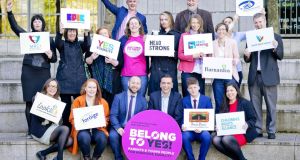 Representatives from the BeLonG To YES coalition at a meeting on the importance for young people of a ‘Yes’ vote in the same-sex marriage referendum. Organisations involved in the coalition include the ISPCC, Barnardos, Foróige and BeLonG To. Photograph: Marc O’Sullivan

The same-sex marriage referendum represents an ‘incredible opportunity’ to look young lesbian, gay, bisexual and transgender people in the eye and tell them they are equal, that they are cared for and respected, a coalition of children’s and youth organisations said on Monday.

BeLonG To YES is the largest coalition of children’s and youth organisations supporting a yes vote in the referendum, including the ISPCC, Barnardos, Foróige, Youth Work Ireland, the Migrant Rights Centre, Headstrong, Yes Equality, the Children’s Rights Alliance, Pavee Point, EPIC and the National Youth Council of Ireland, as well as BeLonG To the national organisation for LGBT young people.

Michael Barron, founding director of BeLong To, said the stakes were very high for LGBT young people in the referendum.

He pointed to research carried out by the Children’s Research Centre at Trinity College in 2009, and supported by the HSE’s national office for suicide prevention, which found that 58 per cent of LGBT young people had endured homophobic abuse, 25 per cent had been threatened with physical violence and 34 per cent had heard homophobic comments from their teachers.

The research also found that 50 per cent of LGBT people under 25 had thought about ending their lives and 20 per cent had attempted to do so.

“A no vote would be a devastating outcome. It would reconfirm to young LGBT people that their all too common experiences of homophobic bullying and rejection are acceptable in Ireland. We would be telling them that their love does not have the same value as everybody else’s, and it would send a hugely damaging message to young people who are already isolated and discriminated against,” he said.

He said societal acceptance was very important for building mental resilience and that the referendum presented an incredible opportunity to demonstrate that acceptance.

He urged young people to make sure they were registered to vote.

Independent Senator Jillian van Turnhout called for a Yes vote in order to send a clear message out to all children in Ireland that they are equal and live in a fair society.

She said a lot of the debate had “conflated and confused” civil marriage with religious marriage.

“I am married myself in the Catholic Church and I have no sense whatsoever that my marriage to my husband will in any manner shape or form be altered or undermined by the extension of civil marriage to same sex couples.

“This is about ensuring equality and parity of legal rights,” she said.

Children’s rights organisations advocating a YES vote also campaign, not just at referendum time, on real and significant threats to children’s welfare and well-being such as child poverty, homelessness, the housing crisis, children at risk and children’s health, she added.

Tanya Ward, chief executive of the Children’s Rights Alliance said children were being used as pawns in the debate and it was very distressing to see.

“ This referendum in no way undermines the rights of the child. If it did why would this coalition of organisations have organised themselves around BelongTo to support a Yes vote. It wouldn’t have happened,” she said.

“If one of my children is gay it is going to break my heart to know the kind of bullying they will be subjected to or the fact they are probably going to consider suicide because they are gay.”

“Voting yes will send a really powerful message to every child in Ireland, to all the LGBT children in Ireland today that they belong, that they are respected and that if they choose to get married and live with someone and commit themselves for the rest of their lives to that person that that choice and that relationlship will be valued and respected.”

Ailish Kerr (22) a member of BelongTo said a yes vote would mean the opportunity for her to be happy and accepted in her own country.

“Do I deserve abuse if I walk down the street holding hands with a girl?.. I can get married to someone completely wrong for me as long as they are male.”

Another member of the organisation, Daniel Zagorski (19), urged people to vote yes so that every child could have the same rights.