BAM has made more than 600 claims for extra costs, Oireachtas committee told 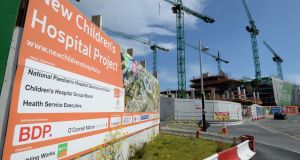 BAM, the main contractor on the National Children’s Hospital, has submitted more than 600 claims for extra costs amounting to more than €200 million, an Oireachtas committee has been told.

In a written statement to the committee, the chief officer of the National Paediatric Hospital Development Board (NPHDB) initially stated that claims for extra costs worth “hundreds of millions of euro”, had been submitted.

David Gunning told Sinn Féin’s health spokesman, David Cullinane, during the committee hearing that “as of right now, we have over 600 claims for a total amount of money which is in excess of €200 million”.

He later told Fianna Fáil’s Cathal Crowe that some are “quite large”, relating to tens of millions of euros, while others are for “trivial items”. He said there has been an effort to address the claims, but that only a “handful of these have been resolved”.

Despite repeated requests from committee members, Mr Gunning could not provide concrete timelines or cost projections for the delivery of the project. He told Social Democrats co-leader Roisin Shortall that the board is continuing to work towards the contract timelines, which she described as “delusional”.

However, Mr Gunning did conceded there would be delays and associated cost issues on the project.

“The contract date for completion is August 2022, and I guess it’s absolutely fair to say that we have no expectation at this time that that date will be fulfilled,” he said, adding that while the approved budget for the project is €1.433 billion, “it’s fair to say there are considerable pressures on that particular budget.”

“Time on any project tends to impact costs, and this project will not be an exception to that particular issue.”

He said that the NPHDB hoped to give an update on both timing and costs in the first quarter of 2021.

In a statement issued on Wednesday, BAM said it is “fully committed” to delivering the project, and disputed several issues raised at the committee.

The company argued that it has “not received a fully complete, co-ordinated design for the project” and that new amendments are being added to the design “all the time”.

It said that it was required to notify the board whenever an event arose which might give rise to additional costs, and argued that there have been almost 10,000 new drawings since January 2019. “Therefore it is hardly surprising that there are hundreds of notifications from BAM and its major subcontractors of potential additional costs/delays.”

BAM also criticised the NPHDB for its compliance with several other technical issues, including sign off for certain design stages and the failure to supply of a full set of working drawings at the time the instruction to move to above ground works was issued, in January 2019.

It said that the impression was given that it has no work programme, but it has “several programmes and has updated them every month”, and that each has a specified end date. It said it disagrees with the contention that work programmes are “non compliant”.

It said it continues to engage with the board “through all of the mechanisms in the contract” on these issues, and that it has no capacity issues in terms of delivering the project. The company said “It has not been explained what specific provisions of the contract prevent it from being included in the Covid compensation arrangements.”

In March of this year, the committee was told that the project was six months behind schedule, which was further impacted by the seven week shutdown associated with Covid.

This was followed by another seven week period where BAM and the board were in dispute over whether the developer would return to work, due to the costs of resuming construction amid Covid-19 restrictions. During that period, Mr Gunning said that BAM made several requests for additional payments.

“Those two periods added to the accumulated delay as in March, would give a clear indication of where the project was and where the project is currently, in terms of its accumulated delay,” Mr Gunning said. He said that projected payments to BAM at this point should have been around €545 million, but actual payments were €308 million, giving an idea of how far behind schedule the hospital was.

He told Ms Shortall that around €2 million had been paid out “over and above” agreed contractual payments so far, and around €15 million had been budgeted up until August 2022 for fees for lawyers and other experts - a figure that was “considerably higher” than anticipated due to the extensive disputes with BAM.

Eilish Hardiman, the chief executive of Children’s Healthcare Ireland, which will run the hospital, told Green Party TD Neasa Hourigan that it will take eight or nine months for the hospital to become fully operational after it is handed over when building is completed.

The committee also heard that there are disputed figures relating to the development of satellite sites at Connolly Hospital in Blanchardstown and Tallaght. While Mr Gunning said the Connolly figure was not significant, in Tallaght a conciliation process is under way for “one large (claim), which is for a number, a significant amount”, and that “we are trending above the contract price in Tallaght”.

Mr Gunning told Fine Gael Senator Sean Kyne that, at this stage, concrete and steel works at the site should be completed, the facade should be three-quarters finished and the fitout should be almost halfway complete. “We’re not completed with any of those individual items,” he said. “The delay in our estimation would be down to the challenge that contractors faced in terms of providing resources to the project,” he said.

In his written statement to the committee, Mr Gunning said BAM “has been underperforming as regards project execution and has been extremely assertive as regards claims.

The committee heard that in some instances, these claims have been paid, but also that BAM has being making claims for funding “on matters that we believe fall within its contractual obligations”.

He told TDs and Senators that the board is using “all levers” available to it “to manage and defend against claims so as to protect the public purse”.

During the course of questioning on Wednesday, Mr Gunning was asked about the degree to which design of the project had changed. He said that the board’s view is that the design upon which the developer made their quotations and tendered was “pretty complete and was accepted as so”

“We’d argue there hasn’t been any significant change in terms of the scope of the project, what we’re expecting to build,” he said.

Regarding the delay to resuming works, in his written statement Mr Gunning told the committee that BAM did not reopen works on the site until July 13th, seven weeks after it was permitted to do so, and despite “ongoing engagement with the NPHDB”.

“Despite ongoing engagement with the main contractor, we are still without a valid works programme that is in line with its contractual obligations,” Mr Gunning said, adding that the NPHDB is withholding 15 per cent of monies invoiced every month “until such time as a compliant programme is delivered”.

Mr Gunning said the NPHDB is “interrogating the programmes provided by the contractor and evaluating all current and potential cost pressures on the project”.

The contract for the hospital has a guaranteed maximum price, which Mr Gunning told the committee means the contractor has to deliver the project in the timeframe set out “and within the budget agreed”.

“If it fails to do so for any reason, the construction cost must be borne by the contractor.” In spite of this, BAM has been making the extra claims.

“Where the contractor is entitled to costs under the contract, the NPHDB has been discharging payments, but claims are being made for funding on matters that we believe fall within its contractual obligations.

“We are using all levers available to us through the contractual process to both put pressure on the Main Contractor in order to deliver performance, and to manage and defend against claims so as to protect the public purse,” he said in a statement to the committee .

While there is a dispute management process which is dealing with claims, Mr Gunning told the committee he is limited in how much he can discuss specific issues at stake due to confidentiality clauses. However, one dispute has reached the High Court, in relation to the instruction for Phase B construction works to begin, issued to BAM by the NPHDB on January 8th last year.

BAM has disputed the validity of that instruction, and the dispute resolution process has failed to find a solution. “In order to rigorously defend the public purse, the NPHDB has been left with no option but to bring the matter to the High Court,” he said in his written statement. That case is set to proceed next month.

Mr Gunning said a claim about the design of the hospital by BAM will be at the core of the case.