‘I’d be a bad boss if I didn’t stand by my manager,’ publican says 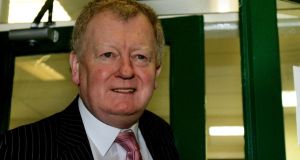 Publican Charlie Chawke said he felt he had to continue defending his manager Wayne Buggle, who alleges he was told his throat would be slashed before the Connors family was refused service. Photograph: Matt Kavanagh

Publican Charlie Chawke has indicated he will appeal a court direction to pay €33,000 to members of a Traveller family refused from one of his premises.

In a Circuit Civil Court judgment on Thursday, Judge John O’Connor said the decision to refuse service to members of the Connors family at the Orchard Inn at Butterfield Avenue, Rathfarnham, Dublin, was “reminiscent of a dark period of Irish history that we thought was over”.

He said Freda, Patrick, Kathleen and Larry Connors had been the subject of humiliation and denigration, and ordered that costs be awarded in their favour, bringing the likely cost of the judgment to €100,000.

The judge said “there was a clear policy that [the Connors] were to be excluded and I would advise the owner that he should change that”.

Mr Chawke told The Irish Times on Friday he respects the judiciary and the judge’s right to deliver his judgment, but he felt he had to continue defending his manager Wayne Buggle, who alleges he was told his throat would be slashed before the family was refused service.

Mr Chawke said: “We obviously have to appeal against the judgment . . . I’d be a bad boss if I didn’t stand by my manager.”

Mr Chawke said he had “no problem” with Travellers. “I’ve nine pubs and why would you have a problem with someone who behaves themselves and spends money on the premises?”

He said he owed significant sums to banks and was focused on encouraging custom to generate revenue for his business, regardless of the customers’ background.

In his ruling, the judge said the Connors family was never going to get into the Orchard and it was simply because of their ethnicity and a deliberate policy to exclude Travellers.

He said the evidence of Mr Buggle, who had refused them entry, had been evasive and the court had found it disturbing that throughout his evidence he had kept referring to the Connors family as “these people”.

The judge said he found the evidence of another defence witness untruthful and, although one witness who had been an independent witness called by the defence had been truthful, the judge found his evidence more helpful to the Connors family’s case.

The judge said the effect on Freda Connors (31), whose family resides at Stocking Hill, Rathfarnham, had been particularly disturbing. She was a heavily pregnant young mother who had her young children with her.

The judge did not accept that when asked by Mr Buggle if he had a reservation, Patrick Connors had said: “Get out of my way or I’ll slit your throat.”

Counsel for the Connors family said there had been an incident in the Orchard Inn several weeks previously involving a Traveller group not associated with his clients and it was his case that they had been excluded because they were Travellers.