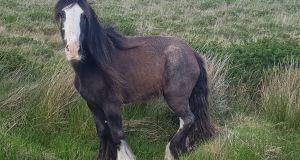 Petal the pony was found injured and in a distressed state on the Sugarloaf mountain in Co Wicklow. Image: ISPCA.

An animal welfare charity believes a pony found on a Co Wicklow mountain was most likely abandoned because she was injured and the owner did not want to pay for veterinary treatment.

The Irish Society for the Prevention of Cruelty to Animals (ISPCA) said the pony, now named Petal, was discovered on the Sugarloaf in a distressed state and extremely lame in recent days.

ISPCA chief inspector Conor Dowling said Petal “was struggling to walk and every step she took caused her pain”.

Mr Dowling, a member of the Irish Horse Welfare Trust and a Department of Agriculture veterinary inspector, assisted by members of the public, were able to guide Petal into a horsebox.

A veterinary examination later revealed she had a severe infection and an injury. Petal requires medication and rest while the injury heals.

The ISPCA appealed to anyone with knowledge about how the pony came to be abandoned to come forward.

“It is my belief that this unfortunate pony was dumped on a mountainside because she was injured and the person responsible for her care didn’t want to pay for her veterinary treatment,” Mr Dowling said.

Information can be provided to the ISPCA, in confidence, via 1890 515 515 or helpline@ispca.ie in confidence.