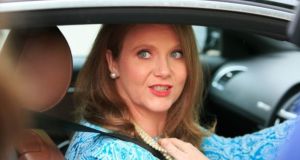 Fine Gael Senator Catherine Noone said her choice of language was ‘inexcusable and wrong. I am truly sorry’. File photograph: Gareth Chaney/Collins

Taoiseach Leo Varadkar has said the fact that Fine Gael Dublin Bay North election candidate Catherine Noone has apologised and withdrawn a remark about him being “autistic” is good enough.

“She has withdrawn her remarks and apologised and, you know, that’s good enough for me,” he told RTÉ in Galway where he was campaigning on Tuesday.

“Well, you know, it’s not about me. I just think that we all need to be very aware. I’m very respectful of people who have autism, people who are on the autism spectrum and we need to understand that those terms should never be used in a pejorative way at all.

Ms Noone, who was elected to the Seanad after failing to win a Dáil seat in 2016, apologised on Tuesday for calling Mr Varadkar “autistic” during an election canvass this week.

She was quoted in The Times Ireland edition as having said of Mr Varadkar: “He’s autistic like, he’s on the spectrum, there’s no doubt about it. He’s uncomfortable socially and he doesn’t always get the in-between bits”.

The publisher reported that she had initially denied having made the comments, before being told there was a tape of her saying them.

In a statement, she said she wanted to “unequivocally apologise and withdraw all of my remarks...which were completely unacceptable”. She said her “choice of language was inexcusable and wrong. I am truly sorry”.

Ms Noone, who is Minister for Climate Action Richard Bruton’s running mate, said she would not be making any further comment.

The autism awareness group AsIAm urged people not to engage in “doorstep diagnosis” of autism following her comments.

Fiona Ferris, the deputy chief executive of the advocacy and support organisation, said the apology from Ms Noone was not enough. Ms Ferris described the comments as “quite shocking” and it was “completely unacceptable” to the autistic community for the word to be used as “a descriptor” or an adjective.

Autism should never be used as a slur or a negative. 1 in 65 people can be on the Autistic Spectrum - including someone I know and love dearly. As a society we need to become much more aware in relation to Autism and not use casual stereotypes

Autism diagnoses only comes after an extensive clinical process, she told RTÉ radio’s Today with Séan O’Rourke show, adding that autism should not be used to describe someone.

Ms Ferris said she did not accept the apology and that Ms Noone should “fully educate herself on what autism is”. Autism is not an illness it is a condition, she explained, and it was of great concern that a political representative thought it was acceptable to use the word as a descriptor.

In a statement on Tuesday afternoon, Tara Matthews, deputy executive director of the Irish Society for Autism, said off the cuff and thoughtless remarks can be very hurtful and increase the stress and isolation that some individuals with autism and their families experience.

“When dealing with autism it is imperative to respect the dignity of individuals with the condition and their families,” she said. “These recent comments further enhance the need for an Autism Spectrum Disorder Bill to promote awareness, and education, improved autism services and a comprehensive strategy for the future.”

Reacting to Ms Noone comments, Minister of Health Simon Harris tweeted: “Autism should never be used as a slur or a negative. 1 in 65 people can be on the Autistic Spectrum - including someone I know and love dearly. As a society we need to become much more aware in relation to Autism and not use casual stereotypes.”

“They were ill-informed and extremely damaging to a section of Irish society”, said Mr McGrath. “People with autism are a part of Irish society and should always be treated as equals in line with the UN Convention for the Rights of Persons with a Disability.

“... I accept Ms Noone’s apology but we will need to focus on our new Autism Plan which will deliver an awareness raising campaign, a national training programme for clinicians and improvements to the assessment process.”

The Times Ireland edition article said Ms Noone made her original comments after being asked about the Taoiseach’s performance in last week’s Virgin Media head-to-head debate with Fianna Fáil leader Micheál Martin.

During the debate, Mr Varadkar responded to criticism from some quarters that he sometimes appeared to lack empathy on issues such as health and the homelessness crisis.

He told host Pat Kenny: “I care about this country. I probably can’t put it into words as well as my opponent, but I do it with my actions...I show my empathy in the work I do, maybe I don’t say it in the right words.”

Ms Noone said the Fine Gael leader was “extremely bright” and a “very decent guy”.

“If I do say so, I am much more natural than he would be. I’ve been in rooms with him and he doesn’t know what to do with himself. He’s naturally shy. But he’s actually a very good politician.”

She added: “He’s not into the nudge and wink, any of that craic. If you’re looking for him to appoint someone, and you say ‘they’re a Fianna Fáiler’, he’ll say, ‘I just want the best person for the job.’ I really respect that about him.”

According to The Times Ireland, when contacted for clarification of her remarks on Monday, Ms Noone initially denied that she used the word “autistic”, but when informed a recording existed, she said she did not mean the word literally.

“I didn’t mean it in the sense of the actual illness or anything. I just mean he can be a bit wooden and lacking in empathy,” she said. “I shouldn’t have even said it in that way.”

The Times Ireland quoted Ms Noone as attempting to give examples of potentially offensive words that could be used out of context, such as “special” and “n***er”. She quickly clarified that she would never use the latter word and said that it was a bad example, The Times Ireland said.

Ms Noone argued that her comment had been taken out of context. The Times Ireland reported she said: “Sometimes I say, ‘Oh God, I’m a bit special’ but I don’t mean it to be derogatory.”