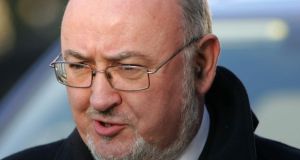 The Sinn Féin TD was reacting to the latest threat sent to the five local QIH directors that this was their “last warning” to resign from the company or face a “permanent solution”.

The threatening letter warns council workers not to remove signs erected condemning the local directors for their management of the Fermanagh-based building materials firm lost by former billionaire Sean Quinn.

“Anyone that removes the signs whether that be council employees or outside contractors will be targeted – all of this will be brought to a conclusion very shortly,” the letter says.

Mr Ó Caoláin said that the latest threat was “totally and absolutely unacceptable.”

“The people responsible need to cease their activities immediately and anyone with information in relation to any and all that has taken place in the area should be cooperating fully with either the Garda Síochána or the PSNI, wherever they are domiciled, “he said.

The inclusion of council workers or outside contractors in the warning was a “reprehensible development” and “hugely worrying” and “something that I have no doubt all right-thinking people will outwardly condemn,” he said.

The Sinn Féin politician urged local people to speak up and share information about the attacks and threats.

“People’s silence only feeds into a climate that allows these people to continue with their reprehensibile behavior. The only way it can be properly challenged and brought to an end is people standing absolutely and solidly in opposition to it,” he said.

“The issue of fear is something that can be self-generating and self-perpetuating if people don’t take courage in their hands to stand up and stand out and roundly reject the people responsible and whatever interests.”

Cavan County Council cathaoirleach Fianna Fáil councillor Shane P O’Reilly said that the council “takes the responsibility for the health, safety and welfare of its staff very seriously and we will continue to monitor the situation.”