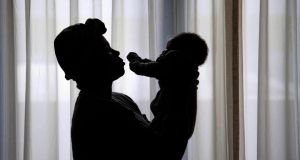 Adeola Adeniyi and her newborn son: Some days they went to a shopping centres to sit on the public seats while she fed Josiah. Photograph: Nick Bradshaw

A “clear direction” stating who is and who is not entitled to housing is “urgently needed” from the Government to ensure all homeless families are supported, the director of Dublin’s homeless services has warned.

Eileen Gleeson, director of the Dublin Region Homeless Executive, said about one-third of families presenting as homeless were from outside the country and had “unclear housing entitlements”.

This caused difficulties establishing their right to homeless services, leaving them particularly vulnerable if they lost private rented housing.

“The way housing entitlement works is you have to have a connection or be working in Dublin,” Ms Gleeson told The Irish Times. “We’d like that sorted out because it can be vague.”

This could be “cruel” for families with children, said Ms Gleeson, adding that at any one time about 50 families were entitled to just night-to-night accommodation. Among these can be Irish families originally from outside Dublin or non-Irish families who have lived in the capital for several years.

“The faster we can sort out their housing entitlements for them when they present, the better. Then at least we can move them into supported temporary accommodation and off the night-to-nights which, when there are children, can be cruel.

Her concerns are echoed by the Mercy Law Centre, an NGO specialising in housing rights, which has dealt with numerous families facing rough sleeping or provided with only night-to-night accommodation.

“We have also dealt with several families who have had to sleep in Garda stations, in tents, or in their cars because they are not able to access even night-to-night accommodation, due to lack of availability or other reasons.

“In our experience, ethnic minority families, including Traveller and Roma families, are disproportionately affected and this is of serious concern. We are also concerned at the lack of supports available to the cohort of vulnerable families who are on only night-to-night emergency accommodation.”

The issue has also been raised by Owen Keegan, chief executive of Dublin City Council, and the council’s head of housing, Brendan Kenny.

On September 20th, Mr Kenny and Ms Gleeson, in a letter to Minister for Housing Eoghan Murphy, said Dublin Region Homeless Executive data showed “approximately 33 per cent of family household presenting as homeless and 42 per cent of rough sleepers are foreign-nationals . . . Legislation and guidance is urgently needed to enable appropriate responses to these households in the context of homelessness. The issue is outside our control and urgent action is required”.

A spokesman for the Department of Housing said it was “aware of the challenges being faced by the DRHE in dealing with individuals and families accessing emergency accommodation, who are unable to apply for housing supports.

“We are continuing to examine this issue in consultation with the DRHE and other local authorities.” He said the department was working with a homelessness inter-agency group and the Department of Justice also to examine solutions.

Adeola Adeniyi (33) has been homeless since September. At the end of October, she brought her four weeks’ premature baby Josiah from the Rotunda maternity hospital to a B&B in Gardiner Street.

At 10am the following day, she, Josiah and her 16-month-old son David had to leave as they were entitled to just one night’s accommodation.

“We had to check out, with all our things, with bags underneath the buggy. We went to the Rotunda hospital because I knew we could sit in the waiting area. I was exhausted. I wanted to cry but I couldn’t in front of David.”

Adeola has had Focus Ireland, the Mercy Law Centre and Crosscare advocating for her since she had to leave her sister’s house in Blanchardstown due to overcrowding. Earlier this year, she lost her private rented accommodation after the breakdown of her marriage.

Originally from Nigeria, she has been in Ireland for 16 years, having come as a teenage asylum seeker. She was granted leave to remain and is an Irish citizen.

As she has not needed social housing supports before, when she presented at Fingal County Council as homeless she was told she would have to establish her right to housing, fill in forms and submit supporting documents.

For the first few nights, she and David slept in a church she attends in Blanchardstown. She made contact with Focus Ireland who intervened to secure her and David access to night-to-night accommodation while her housing application was processed.

Heavily pregnant. she had to bring her toddler around the streets during the day, resting in fast-food outlets and shopping centres. Through October and November, they stayed in four B&Bs. The Rotunda hospital assigned a social worker to her, who put her in touch with Crosscare. A key worker there contacted with Fingal County Council asking that her housing application be expedited.

“They said they lost the application. [The key-worker] filled in another application with me, copied all the documents and faxed it to the council.”

In late October, her waters broke a month early and she walked from the B&B with David to the Rotunda. She was sent back to the B&B, not yet fully in labour and later that night called an ambulance to bring her back to hospital. Her sister collected David and she gave birth to Josiah.

“I went back to Gardiner Street with my new baby and David. We had to leave the next day.” She could check back into the B&B in the evening. This process of checking in and out continued through November.

She got little sleep at night between feeding Josiah and because David, who shared a bed with her, is “a very light sleeper”.

Some days they went to a shopping centres to sit on the public seats while she fed Josiah.

“One day a security guard said to me, ‘You are here again. You can’t keep coming here. You have to go.’ I just wanted to feed my baby. I couldn’t understand. I was trying to get to know my baby and look after David. You have no idea how tired I was.”

“She was prevented from meeting the fundamental needs of her newborn baby – to sterilise bottles, to breastfeed him in comfort, to be somewhere warm and safe. We are hugely relieved the local authority responded very quickly to our intervention and immediately provided secure and stable emergency accommodation, once we highlighted the extreme circumstances and indefensible nature of the provision.”

The family has a hotel room until January 7th. “I hope my housing application will be processed then,” she says. It will entitle them to supported temporary accommodation.