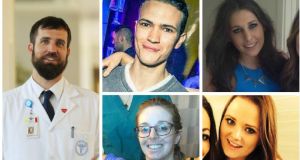 The brain injury and spinal cord centre at the Santa Clara Valley Medical Center, 80km south of San Francisco, is busy with doctors, nurses and support staff running around. There is a caring but hard working atmosphere with all attention focused on the patients.

The publicly-run medical centre helps patients recover from serious brain and spinal cord injuries. The trauma rehabilitation centre next door deals with the most severely injured emerging from intensive care. Here, medics work to bring patients off ventilation, to allow them to breathe on their own and prepare them to move into the step-down centre for intensive rehabilitation and ultimately their return home.

Santa Clara is home to the four of the seven students injured in the Berkeley balcony collapse who are still being treated in the US: Aoife Beary, Clodagh Cogley, Hannah Waters and Niall Murray. Collectively they were treated at five hospitals in the San Francisco Bay Area before coming here, one of the top trauma hospitals in the region.

Ms Beary, who suffered a serious brain injury, is being treated in the rehab trauma centre, while the other three Dublin students are in the brain and spinal cord injury rehab centre undergoing a rigorous programme of rehabilitation lasting three hours a day, six days a week.

The schedule can be so gruelling that in some cases it requires around-the-clock bedside care by the families to prepare them for the rehab programme, particularly in light of the psychological trauma they have experienced.

“It is sort of an ICU [intensive care unit] with a therapy team,” said Ann Perkins, the rehabilitation services programme manager of the centre where Ms Beary is being treated.

Unlike other trauma centres, Santa Clara’s rehabilitation doctors co-manage the patients in an ICU setting. The process aims to remobilise them, to treat them out of the bed and into a rehab setting.

The families said the students had good days and bad, and they were progressing slowly through what they had experienced physically and emotionally that night in Berkeley.

Several family members spoke to The Irish Times on a visit to the Santa Clara facility but did not want to be individually identified.

The families acknowledge that the students are lucky they could come to the Santa Clara, a level-one trauma hospital and one of just two hospitals in the entire United States with a trauma rehabilitation centre.

Dr James Crew, chair of physical medicine and rehabilitation at Santa Clara, said cases of new disability brought challenges, both physical and psychological; there is a higher risk of illness, be it bladder or skin infections or the breakdown of the skin.

“It is really unusual for us to see anyone come in and just progress every single day along the way when it comes to complete spinal cord injury or severe brain injury or even stroke for that matter,” he said.

“Usually it is a process of ups and downs but as time goes on there are fewer steps backwards than there are forwards.”

The nature of the centre’s work means they treat more younger people. The average age is 42 and the hospital treats patients as young as 15.

Patients typically remain in the centre for a few weeks, coming off the ventilator after two weeks before spending on average another four weeks in the rehab centre as the medical staff prepare them for life at home. On average 80 to 85 per cent of patients return home.

In the cases of the four students, the return home has the added complication of a long flight back to Ireland so they have to be ready.

The rehab centre has a replica kitchen and bedroom to allow patients to prepare themselves for home in a hospital setting surrounded by medical staff.

“This is to get them to practise and eventually get back to copying as much as possible a normal home environment,” said one occupational therapist, standing in the kitchen surrounded by tubs of ice cream.

Every Wednesday the centre brings patients on outings – a picnic in the park, dinner in a restaurant, a baseball game, a bookshop visit and a farmers’ market where patients pick and buy their own produce, bringing it back to the hospital to cook it. There is a sunny outdoors area where patients get what can be their first breath of fresh air for weeks.

“People need to work hard to get back their independence; they really have to be motivated to get well,” said Ms Perkins.

To assist patients, the centre has a magician (a scientist working at nearby Google) and musicians who come and entertain. Two therapy dogs, Coco and G, are trained to help the patients. One dog is able to let the patient know if another person is walking too close, and can close a door or alert the patient if they have left something behind.

In a Facebook update the week after the accident Ms Cogley posted a photograph of herself looking happy holding one of the dogs.

He was a member of the team that established the National Rehabilitation Hospital in Dún Laoghaire in the 1960s where some of the students will be treated when they return to Ireland. There is a plaque to Dr Wilmot on a wall down the ward from Ms Beary’s room.

For the students, the recovery is a day-by-day process; at times in the immediate aftermath of the June 16th accident, it was hour by hour.

In one case, they are only now starting to deal with the emotional side of what happened and the preparations for the eventual journey back to Ireland and the difficult road thereafter. In Ms Beary’s case, a severe brain injury has made it difficult to deal with any of that.

The families were keen to stress that they found the outpouring of support, both at home in Ireland and amongst the Irish community and beyond in San Francisco, “overwhelming and humbling”.

Even the smallest gesture, like dropping off a box of Irish tea bags, moved the families hugely. There were boxes of food and other packages left for them with no names attached for the families to be able to send a note of thanks.

“I remember every single person. It doesn’t matter how little it is,” said one mother at the hospital. “If I had a dollar for every tea bag, we would be millionaires,” said a father of one of the four injured students, joking about the extent of the generosity shown.

“For me it was the gesture,” said his wife. “Have a cup of tea – it will be all right. It was incredible how many people were so well meaning.”

The families were particularly touched at how so many people did so much to help young people who became the “children of Ireland”.

“It was beautiful to hear that from home, how the people reacted to it. We were overwhelmed, all of our family and extended family,” said one mother.

‘Proud to be Irish’

The sister said that her injured sibling wanted to thank all of the friends back in Ireland who are “slaving over” the events to raise funds for the injured because they couldn’t send emails to everyone. All of their efforts were really lifting them in the recovery process, she said.

The month’s mind vigil in Berkeley earlier this month was an opportunity for many of the families to meet the paramedics, police and fire department staff who tended to their children at the scene of the accident early on that Tuesday morning.

The families all recognised the trauma of what they had had to deal with that morning.

“I did meet one of the paramedics and he was in tears. He wished he could have saved more. They were really emotional at the whole thing. They wanted to do so much,” said one mother.

While the recovery at the Santa Clara and beyond will not be easy, the families say that forefront in the minds of the injured students are the victims.

“Whatever about the injuries they have suffered, the biggest issue for them is the loss of their friends,” said one mother, referring to the six students who were on that balcony with them that June morning, and who died in the tragedy.