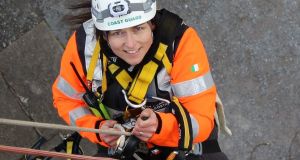 File image of Caitríona Lucas, who died during a search operation at Kilkee, Co Clare.

The husband of a Coast Guard volunteer who died during a search operation has said he has taken comfort from resuming his own search and rescue duties.

Caitríona Lucas, a 41-year-old mother-of-two, died after her rescue boat capsized off Kilkee, Co Clare, last September, during a search for a missing man.

She was the first Coast Guard volunteer to die during a search and rescue operation.

Her husband Bernard, who is also a Coast Guard volunteer, said it was important to return to the service shortly after his wife’s death.

Originally from Ballyvaughan in Co Clare, Ms Lucas worked as a librarian.

As well as being a volunteer herself, she had also trained her dogs with the Search and Rescue Dog Association.

Bernard had been alerted by beeper to the Kilkee accident and responded as normal, not knowing that Caitríona had died.

“My pager went off at home. It was an upturned boat in Kilkee. So I proceeded to Doolin as normal and got on the boat in Doolin and went from Doolin to Kilkee,” he recalled, during an interview on Friday night’s Late Late Show on RTÉ.

After responding to the incident, Caitríona had initially expected to assist in the search on the shore.

“I hadn’t known she was going to be on the boat. I had no idea of, number one, that she was on the boat, or number two, the enormity which unfolded later on,” Bernard said.

He arrived at the scene in Kilkee and saw that gardaí were at the pier.

“They asked to speak to me and that was it. I was taken over to where Caitríona had been taken from the water and I flew with her to Limerick in the helicopter. [It was] awful, absolutely awful.”

However, he urged people to volunteer.

“It is the best thing you can do, it really is. You don’t realise what it means to people to get a person back that has been missing or retrieve a body from the water and to give it back to people.