The husband of the late Caitríona Lucas says it is a great honour that one of her paintings has been featured in two new stamps issued to honour the Irish Coast Guard. 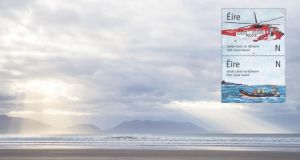 An Post has issued two stamps marking Irish Coast Guard’s provision of search, rescue and monitoring services at sea, on the coast and waterways of Ireland. The stamps are based on an original painting by the late Caitríona Lucas, who lost her life while volunteering with the Coast Guard on September 12th, 2016.

The family of an Irish Coast Guard volunteer who died while on a search mission have said they are proud her artwork features on two newly-issued stamps.

An Post said the stamps, based on a painting by Caitríona Lucas who lost her life while volunteering in Doolin, Co Clare, on September 12th, 2016, marked the important role of the Coast Guard in Irish life.

Ms Lucas’s widower Bernard Lucas said it is a great honour for her family.

“She painted stuff that she loved. She loved the Coast Guard, she was really into it, it was a very big part of her life, of our lives,” he said.

One of the stamps depicts a rescue helicopter and the other a Coast Guard rescue boat. Both scenes were taken from the same original painting by the late Ms Lucas.

They were unveiled at the GPO, Dublin on Thursday, while a Coast Guard team also displayed a set in Dublin Bay.

Debbie Byrne, managing director of An Post Retail, said they pay tribute to the work of the Coast Guard.

“Stamps mark important aspects of Irish life and these beautiful stamps acknowledge the service given by members of the Coast Guard to keep us safe when we are in or near the water,” she said.

“We also recognise the families of those Coast Guard volunteers and staff who have lost their lives while serving the Irish people.”

Gerard O’Flynn, national manager of the Coast Guard’s volunteer branch, said he was “particularly pleased that Caitríona’s work is being honoured in this way.”

“We would hope that the Lucas family will take some strength from this recognition,” he added.

Mr Lucas told RTÉ’s News at One he wants people to think of the Coast Guard when they see the stamps, of the people serving with the Coast Guard lost in recent years and “of all the volunteers who are still going out every day.”

Asked if he was proud of his late wife, he said: “I’m always proud of Caitríona. She was a bright light that shone brilliantly.”