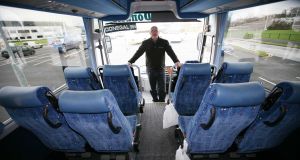 Brian O’Donnell, who runs the Donegal-based private bus company, Bus Feda, will not entertain charges that he has cherry-picked a lucrative bus route out of the hands of Bus Éireann. *

Set up by his father, Feda, 50 years ago, the company began a Donegal/Galway service in the early 1980s when neighbours in the west Donegal Gaeltacht were having problems getting home from university in Galway.

Back then, CIÉ as it then was, according to O’Donnell, went no further north than Donegal town – 30 miles from Letterkenny and 45 from Crolly.

“They had to thumb a lift home for the last part of this epic journey, often late at night and in the worst of Donegal weather,” he explained.

Today, the private bus companies are getting part of the blame for Bus Eireann’s Expressway’s financial woes, though O’Donnell rejects charges that he has taken the best routes, or pays his people less.

“We have no problem keeping staff,” he insists.

“Two of the boys are driving for us for over 25 years and four or five for more than 10 years. We have worked in harmony with Bus Éireann for many years.

Today, Bus Éireann does serve Letterkenny, but not west Donegal, though the three parishes of the Rosses, Gweedore and Cloughaneely – the most densely populated rural region in Europe – has, nevertheless, an enviable bus service.

In all, no fewer than four private bus companies operate – Bus Feda, McGinley’s who run a Donegal-Dublin service, Gallaghers with a Donegal-Belfast route and Mannions who keep it local with a Crolly to Letterkenny service.

“We all take the same route to Letterkenny so people hop on the first bus that comes along,” says O’Donnell.

Official stops include Paddy Óg’s pub in Crolly, the crossroads in Bunbeg, and the post office in Kilmacrennan.

Dealing with the cherry-picking charge, O’Donnell points out that his buses can serve Knock in Co Mayo, but he does not have a licence to stop at Ireland West airport, which lies 21km north of the town on the N17.

Today, his company has increased its fleet from “seven or eight vehicles” to 15, including 11 coaches, but the Donegal-Galway route which goes via Sligo and Mayo is the mainstay of the 20-employee company.

O’Donnell’s father started the business after he returned from Scotland to his native Ranafest in 1961, where he initially made a living taking people to the “Scotch boat” which brought passengers and cattle from Derry to Glasgow.

From taxis he progressed to mini-buses and then he decided to give the Galway route a go. “It took off,” says Brian, who quit his job as an engineer in London in 2008 to come home and help run the business.

His return came at the height of the economic crash, but even recessions have silver linings.

Before 2008, parents bought cars for college-going sons and daughters:

“When the recession hit these cars disappeared because they could not afford the tax and insurance,’ said O’Donnell .

O’Donnell refuses to accept the arguments made by both Bus Éireann management and unions that part of the State company’s difficulties are caused by the number of free travel passengers it has to carry.

Last Friday, one of Bus Feda’s drivers, Donal Sweeney, speaking after he had pulled up at the Institute of Technology, Sligo, sympathised with Bus Éireann drivers.

They are, he said, “being unfairly targeted when it was clearly mismanagement which allowed this situation to develop”. Better-paid management, not workers are to blame, he insists.

Expressing his surprise at suggestions that up to 70 per cent of passengers on some bus routes have free travel, he notes that most Bus Feda passengers are students attending NUI Galway, GMIT, IT Sligo and Letterkenny IT.

Watching a trickle of students heading for his coach, Sweeney believed that just one-in-ten of his passengers have free travel passes.

“We have an agreement with the Department of Social Protection which means they cover 70 per cent of the cost” explained O’Donnell earlier.

He added that these passengers are always welcome.

On a bitterly cold day, students gratefully eased themselves into the warm, wi-fi-served coach: “It’s great because we can pick it up here at the college rather than having to walk into town”, said Niamh Greaney from Galway.

“They are never any bother. We have wifi – that probably helps. They use the buses to sleep, study or catch up on social media.”