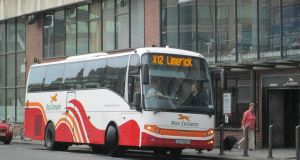 Bus Éireann has said the number of services on the Dublin-Limerick (X12) route will be reduced from March.

There is a growing prospect that the dispute which will bring Bus Éireann to a halt from next Monday could escalate and affect Dublin Bus as well as train services across the country.

Siptu and the National Bus and Rail Union (NBRU) said their members in Bus Éireann would stop work from Monday March 6th, the day management indicated it would implement 55 measures - mainly involving work practice changes and new efficiency initiatives - aimed at tackling the financial crisis at the company.

As things stand, school bus services operated by Bus Éireann will not be affected. However, Siptu said on Monday that members working in that sector could be balloted for industrial action.

Iarnród Éireann and Dublin Bus, which also form part of the State-owned CIÉ transport group, are not involved in the dispute.

Unions have told members in these companies that they should not engage in industrial action. However, unions recognise that members in Iarnród Éireann, which shares depot facilities with Bus Éireann in six or seven locations across the country,may opt not to pass any pickets.

The NBRU on Monday warned Dublin Bus management not to take any action - such as moving its vehicles away from the Broadstone depot in Dublin, where the Bus Éireann fleet is based in the capital - which could be “interpreted as a manoeuvre to frustrate Bus Éireann staff in their pursuance of a genuine trade dispute”.

If widespread strike action does take place across the transport sector next week, it will occur at the same time as planned nationwide industrial action by more than 30,000 nurses in a separate dispute with health service management.

Bus Éireann indicated in a letter to staff on Monday that it would not be proceeding, for the moment, with previous plans to target overtime rates, premium payments and shift allowances.

However, it maintained that changes to terms and conditions were essential. The company indicated it wanted further talks with unions on these issues.

NBRU general secretary Dermot O’Leary said the 55 measures which the company planned to implement from next week would, in themselves, have a major impact on his union’s members.

“The fact is that by informing staff that they are going to introduce far-reaching and financially impactful measures from next Monday without agreement, Bus Éireann has left us with no option but to inform the company that we will reactivate our previously notified strike action to coincide with the implementation of these measures.”

The 55 measures sought by Bus Éireann

Siptu sector organiser Willie Noone said the letter sent to staff outlined “an intention to proceed with a series of cuts at the company on Monday next which will automatically result in strike action by workers”.

“The letter is a plan to render Bus Éireann services unrecognisable, and massively curtail the public service the company currently provides.

“This level of cuts and the associated pay reductions already threatened have only bolstered our members’ resolve to resist this attack on the public services they provide.”

Minister for Transport Shane Ross on Monday encouraged the company and the staff “ to engage urgently in a constructive manner”.

“This is necessary to resolve this difficult industrial relations situation, which threatens to greatly inconvenience the travelling public, especially those in rural Ireland. ”

He said the National Transport Authority was conducting a needs assessment of the areas that would be affected by the closure of some existing Bus Éireann routes and would ensure continued public transport connectivity.

Bus Éireann also said on Monday it would begin the planned closure of some routes from next month.

It said the frequency of services on routes from Dublin to Galway and Limerick will be reduced.

“The number of daily services on Dublin-Limerick (X12), and Dublin-Galway (20/X20) will be reduced from March 12th.

“Any staff impacted by these announcements will be redeployed.”

In the letter to staff on Monday, Bus Éireann acting chief executive Ray Hernan said the financial situation continued to deteriorate at an accelerated rate.

“Operating losses at Bus Éireann increased to €1.5million in January, and if this run rate continues the company will be insolvent in May.

“Company management, with the approval of the board, therefore has no option but to implement changes to work practices that will result in immediate cost savings. This will also be a first step on our road to competitiveness.

“These work practice initiatives are only an initial step - further measures involving changes to terms and conditions are also essential.”

Mr Hernan said the company’s objective was not to become a low-cost operator. He said it was committed to protecting basic pay rates and enhancing these as circumstances allowed.

“Delivering greater efficiencies and commencing the process of restructuring is vital to modernising our work practices and making us more flexible. This will enable us to compete effectively and provide the services our customers both desire and deserve.”

Mr Hernan said some the the “inefficiencies” in Bus Éireann were indefensible. “Spending money on bus hire for example, because of the unavailability of a driver or vehicle, is a waste of financial resources and a glaring inefficiency that simply must stop.”

He said a previously announced review of Bus Éireann structures, which will be finalised by the end of March, is ongoing and was likely to result in job losses in some areas but present opportunities in others.

1 When the RIC opened fire on a crowd in Ennis during the Clare grain riots
2 Portraying Sinn Féin as a dangerous party is a political strategy
3 Shannon at high risk of flooding as rainfall warning issued for most counties
4 Coronavirus: Almost 60 new cases recorded in Italy as two die
5 Sinn Féin to hold public meetings around country to rally support for government efforts
Real news has value SUBSCRIBE