Bus Éireann workers promise ‘mother of all strikes’ against ‘the Blueshirts’ 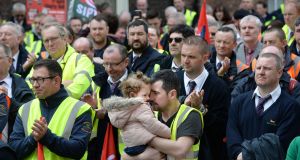 About 500 people took part in a demonstration outside Leinster House on Wednesday to show solidarity with striking Bus Éireann staff.

The rally was organised at short notice when the strikers heard Minister for Transport Shane Ross was due to appear before the Oireachtas committee on transport.

Siptu organiser Willie Noone said it was “impromptu ... there was no organisation, there was no planning”, but he added to loud cheers: “Imagine what we could do if we had organised.”

Speakers condemned Bus Éireann management and the media but reserved their strongest criticism for “them over there”, pointing in the direction of Leinster House, “the Blueshirts” and particularly Mr Ross.

“He hates trade unions. He hates everything that we stand for,” Mr Noone said. “When Minister Ross is not here, Bus Éireann will still be here.” He promised to “ bring this country to a standstill if we have to”.

National Bus and Rail Union general secretary Dermot O’Leary said it would be “ the mother of all strikes”.

Bus Éireann employees from across Ireland attended, including John North who drives the route from Waterville to Killarney. It is the only bus on the route.

He had heard a woman on Liveline complaining her son could not get from Galway to west Clare. “Without Bus Éireann, the private bus operator doesn’t want to operate from west Clare because there is no money in it,” he said.

Alison Rooney and her partner, David Gaynor, are both Bus Éireann drivers. “I love my job. It’s the best job I’ve ever had. I honestly thought I would be here until pensionable age.”

She works routes in Co Kildare and says she is on first-name terms with many of her passengers. “Most privates won’t take them because it is not worth it. We’re a public service.”

Tom Gleeson, a Bus Éireann inspector for 17 years, said the Government could find “crazy money” to spend on Irish Water, but none to solve the Bus Éireann dispute. “The decent people of Ireland will remember all of this when the ballot box comes around to their door. As the lads have said, we’re losing post offices, we’re losing banks, now we’re losing rural transport.”

Bernard Campbell, a Bus Éireann driver working out of Broadstone garage in Dublin, acknowledged there were inefficiencies in their work practices. “There is no public company that there aren’t inefficiencies in,” he said. “We can improve the way things are done.”

He said unions had put proposals to deal with inefficiencies on the table two weeks ago but “at the last minute the company decided to still attack our wages”.

Many Dublin Bus drivers attended the rally, suggesting there would be support for the Bus Éireann strikers if industrial action spreads to the wider public transport sector. “I would say there would be overwhelming support for an all-out strike,” said Alan Gorman, a Dublin Bus driver based in Clontarf garage. “It will be the same for Irish Rail, no doubt about that. If the company [CIÉ] gets what they want from Bus Éireann, definitely there’s no question – we’ll be next.”

Minister for Transport Shane Ross again declined to intervene in the dispute, amid warnings from union leaders and TDs that it may escalate to impact on all public transport services.

Mr Ross told the Joint Oireachtas Committee on Transport on Wednesday that he was “not a mediator” and he would not be “dictating” to the company or the unions on their internal issues. He said if the parties required external assistance that the expert advice of the Workplace Relations Commission and the Labour Court could help them.

The Minister said his participation, if he intervened, would be interpreted as him “bringing the taxpayers’ money” into the talks. “I will not be doing that,” he said.