Bus Éireann strike to continue and may escalate

The Bus Éireann strike which has disrupted the travel plans of over 100,000 people this weekend, could escalate significantly next week and involve Dublin Bus and Iarnród Eireann. Video: Bryan O'Brien 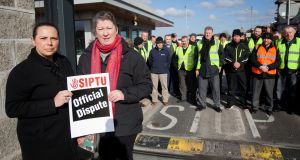 Bus Éireann workers Leona White (left) from Finglas and Ailish Delaney from Clonsilla picketing outside the Broadstone bus depot in Dublin as part of an indefinite all-out strike over the company’s implementation of cost-reduction measures without union agreement. Photograph: Gareth Chaney/Collins

The strike at Bus Éireann, which disrupted the travel plans of over 100,000 people yesterday, will continue this weekend, but could escalate significantly next week, involving Dublin Bus and more train services.

Meanwhile, Bus Éireann directors are due to meet on Monday to consider plans that could involve up to 300 job losses as part of a voluntary redundancy scheme.

Bus Éireann services, with the exception of school transportation, came to a standstill in the dispute, which follows management plans to introduce cost-saving measures without agreement.

Rail services were disrupted in a number of locations across the country as workers in Iarnród Éireann did not pass pickets at depots they share with bus workers.

Train services are expected to return to normal this weekend. However, highly placed sources warned that they could be affected again because protests could be “ramped up” later if there is no move to resolve the row.

Employment lawyers said Bus Éireann staff can place pickets at their place of employment, but they could face potential legal difficulties if they seek to involve workers in other companies.

Currently, no talks are planned. Saying that he would not intervene, the Minister for Transport, Mr Shane Ross said: “If either side, union or management, expects me to become involved in an industrial dispute, they are mistaken.”

Meanwhile, Siptu and the National Bus and Rail Union (NBRU) outlined steps that could end the dispute, including an agreement to protect private and public bus workers’ terms and conditions.

In addition, the two unions called for greater State funding for Bus Éireann and talks that directly involve the National Transport Authority and the Department of Transport.

Calling on Taoiseach Enda Kenny to intervene, Mr Jimmy Kelly, Unite regional secretary, said: “It is not good enough for the Government to adopt a hands-off approach.