Over 100,000 bus passengers affected while Irish Rail routes are cancelled 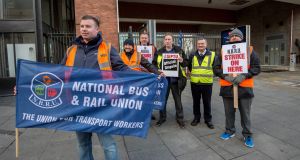 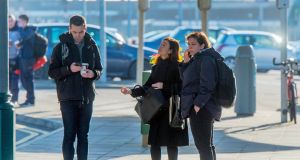 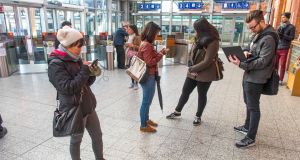 Thousands of commuters face severe travel disruption on Friday as an all out strike by Bus Éireann workers began and many Irish Rail services were cancelled due to picketing.

Irish Rail is not party to the strike, which began at midnight, but its staff will not cross picket lines at stations where their services are shared with Bus Éireann. Dublin Bus services are not affected.

About 100,000 Bus Éireann passengers will be affected, including about 1,500 children who use the school transport scheme.

The company’s separate fleet of school buses which operate under the scheme will not be affected by the strike although the trade union Siptu warned that it could become embroiled in the dispute “very quickly”.

Irish Rail services on the Cork Commuter line, the Waterford to Limerick Junction route, Limerick to Galway and the Limerick to Ballybrophy routes have all been cancelled.

There will be limited services between Dublin and Cork, Limerick, Galway, Sligo and Waterford. Dart services are operating as normal.

Irish Rail spokesman Barry Kenny said the company would offer refunds for tickets bought for cancelled services arising from picketing at a number of locations.

However, the company was not in a position to pay for alternative arrangements, he told RTÉ’s Morning Ireland.

Mr Kenny added it was not company policy to replace bus services during an industrial dispute.

Five trade unions, representing the 2,600 staff at Bus Éireann, announced the strike after a three-hour meeting on Thursday.

The decision followed the move by management on Wednesday to implement unilaterally nearly 50 work-practice changes and efficiency measures. The company argued that the measures were essential if it was to have a viable and sustainable future.

Bus Éireann said industrial action would cause major inconvenience to its customers “and exacerbate the perilous financial situation at the company”.

“To be clear, losses for January and February in 2017 are 41 per cent higher than for the same period last year - and losses in 2016 were €9.4million. The company is facing insolvency in a few short months and not acting to implement cost savings urgently would be completely irresponsible.”

“The board and management have twice postponed the introduction of efficiency measures - which are all within current collective agreements, and do not affect basic wages or current terms and conditions - to allow for 10 days of talks in two separate sessions at the Workplace Relations Commission. “

However, unions said the real objective of management was to cut jobs and terms and conditions to reposition the company as a low cost transport provider.

Siptu said the true agenda of management was “to prepare the company for the future privatisation of public bus services”.

The general secretary of the National Bus and Rail Union Dermot O’Leary said management were determined to “drive a State-owned company into becoming a yellow-pack employer”.

Siptu transport sector organiser Willie Noone acknowledged it was not fair to commuters were given so little notice in the Bus Éireann strike.

“The question that should accompany that is whose fault is this?” he said.

The trade unions had said they would strike if changes or cuts were introduced without agreement, he added.

“We had a hell of a job keeping people working” after cuts were introduced, he said.

“We gave as much time as we could before pulling the trigger. The blame is at the management door.”

Mr Noone told RTÉ’s Morning Ireland trade unions had always contested the company’s figures and no evidence had been provided of the company’s claims on losses.

He said the expiration of the PSO (Public Service Obligation) due in 2019 was a factor. “The PSO routes are the bread and butter of Bus Eireann, ” he said.

National Bus and Rail Union (NBRU) general secretary Dermot O’Leary told the RTÉ’s Today with Sean O’Rourke “People in Irish Rail should be at work this morning because they’re not in dispute”.

However, he said. “Thankfully some people still have a moral compass and won’t pass a picket”.

Minister for Transport Shane Ross said he was deeply concerned at the impact the strike would have on the travelling public and he urged both sides to demonstrate their previously stated “willingness to discuss improvements in the company’s operations and efficiency”.

The employers group Ibec said a strike was in “no one’s interest”, while Retail Excellence said the action “will cause havoc for our retailers who will see a negative impact on footfall and retail sales activity at a time when they can least absorb it”.

For people travelling to the Republic of Ireland v Wales World Cup qualifier:

- Full Dart and commuter services will operate, including extra services before and after match.

- All Cork/Heuston and Cork Commuter services have resumed.

- Customers can travel from Dublin or Cork to/from Limerick Junction.

- Connections to/from Cork services will be provided as follows.

- 5.05pm Heuston to Tralee will operate to Mallow, with a connection at Mallow to Tralee.

- 3.45pm Athlone to Heuston will operate serving all stations to Portarlington and will then run non-stop to Heuston.

- All Dublin -Westport/Ballina services are operating as normal.

- 4pm and 4.25pm Waterford to Heuston services are cancelled.

- 6.25pm Waterford to Heuston will operate from Kilkenny only.

- 3.10pm Heuston to Waterford will operate to Kilkenny only.

- 9.35pm Carlow to Heuston will operate.

- Trains will not operate to/from Sligo, service arrangements as follows:

- 1pm and 6pm Sligo to Connolly services are cancelled.

- 3pm Sligo to Connolly will operate from Boyle at 3.33pm.

- 4pm Connolly to Maynooth will operate.

- 7.05pm Connolly to Sligo will operate to Enfield only.

- 8.24pm Enfield to Connolly will operate.

- 1.36pm Connolly to Rosslare will operate.

- 4.37pm and 6.38pm Connolly to Rosslare services are cancelled.

- 5.36pm Connolly to Wexford will operate.

- 5.55pm Rosslare to Connolly will operate.

There will be no services on the following routes.

- Limerick to Ballybrophy via Nenagh.