Bus Éireann may be forced to close Expressway, report suggests 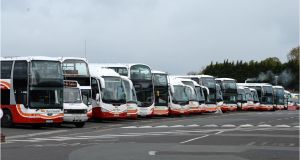 Broadstone depot in Dublin: up to 10 depots would face closure if Expressway, the commercial arm of Bus Éireann, was shut down. Photograph: Dara Mac Donaill

Closing down Bus Éireann’s Expressway network of intercity services may ultimately be the only viable option for dealing with the company’s perilous financial situation, external consultants have advised.

At total of 516 staff could lose their jobs if Expressway, which is the commercial arm of the State-owned Bus Éireann, was shut down while up to 10 existing depots would face closure.

A confidential draft report by the consultants Grant Thornton maintains that there are “limited strategic reasons” for the State to own a commercial bus business.

The report warns that severance payments for staff could be costly if the company got out of the Expressway operation altogether. These could range from €36.6 million to more than €85 million depending on the terms on offer, the company has been advised.

Under the most expensive redundancy scenario suggested, of seven weeks’ pay in addition to statutory entitlements without any limit, the consultants forecast that senior managers could receive about €500,000 while the average payment would be about €166,000. Even if Bus Éireann exited Expressway, significant restructuring of overheads in the remaining parts of the company would be required, the report says.

The consultants warn that Bus Éireann would face insolvency within two years if nothing is done to address losses. The company has faced significant losses in recent times , particularly as a result of growing competition from private bus operators. Grant Thornton was commissioned several months ago to review survival plan options drawn up by company management.

The consultants have suggested that radical plans put forward by management several months ago may not work. These plans included restructuring Bus Éireann and hiving off Expressway into a separate company with reduced workforce and inferior terms for remaining staff.

The consultants express reservations as to whether the business case for restructuring Bus Éireann as envisaged by management would “have the effect of putting commercial (Expressway) or indeed the company on a sound commercial or financial footing going forward”.

The report suggests the company could examine a more “incremental” approach to restructuring Expressway than envisaged by management. It suggests new moves to try generate more money from public service routes, school bus transport and from the Department of Social Protection for passengers entitled to free travel. It warns that a strict timetable would be needed to assess the achievability of these measures.

“However if it becomes apparent that it is not possible to return the company and more particularly the commercial business to a sound commercial and financial footing, then we believe that option three (exiting Expressway) is the only viable option.”

Management at Bus Éireann are due to hold talks with unions in the weeks ahead on restructuring plans.