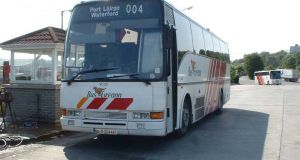 Drivers at Bus Éireann will engage in industrial action if the company implements controversial restructuring plans without agreement, the National Bus and Rail Union (NBRU) has warned.

The union, which will begin a campaign on Wednesday against the planned reforms, said restructuring of the Expressway coach service as envisaged by management “will result in the death knell of rural bus services” if allowed to proceed.

Last September, Bus Éireann signalled it wanted to separate Expressway from the rest of the company, slim down staff numbers and introduce pay cuts for those remaining.

The emergence of the proposals – including news that compulsory redundancies were not being ruled out in a bid to reduce staffing levels in Expressway by up to 150 – led to outrage among trade unions and disagreements over who had authorised the plan.

Minister for Transport Shane Ross said he had only received an outline and had not conveyed agreement of the plan.

A spokeswoman for Bus Éireann said on Tuesday a first draft of the report, carried out by consultants Grant Thornton, had been received.

She said the Expressway plan was a priority for the company. “Given the gravity of the situation, it is also vital to have stakeholder support for this.”

However the NBRU has opposed the plan.

In a letter to TDs, the union said it would “not tolerate the race-to-the-bottom model being foisted upon Bus Éireann and its staff by the flawed policy of the Department of Transport”.

“The NBRU intends, on behalf of our members and the people in your constituency, to challenge the entitlement of the faceless administrators who think that they have a God-given right to make decisions that effect the community without having to answer for their actions.”