Unions to lift pickets when Labour Court makes its recommendations

A timeline to the Bus Éireann dispute, which centres around a €30 million cost saving package proposed by management 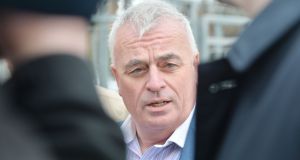 NBRU general secretary Dermot O’Leary said all five unions involved have given a commitment that they will lift pickets once recommendations issued. Photograph: Alan Betson

Bus Éireann services may be on the road as early as Thursday evening following the intervention of the Labour Court.

National Bus and Rail Union (NBRU) general secretary Dermot O’Leary said all five unions involved in the 20 day dispute have given a commitment to the court that they will lift pickets on depots once the court issues its recommendations. That is expected to come at lunchtime on Thursday.

Mr O’Leary said if there are buses available to drive, his members will drive them. “The operations side is up to Bus Éireann,” he said.

Both unions and management attended marathon talks at the Labour Court which began on Tuesday aimed at finding a way out of the dispute which is costing Bus Éireann up to €500,000 a day in lost revenue. The dispute centres on a proposed survival plan for the financially troubled company that involves significant cuts to pay and conditions for staff.

Bus Éireann acting chief executive Ray Hernan said he did not expect buses to be up and running by Thursday evening which marks the start of the Easter bank holiday weekend for many.

“I apologise to the public. That is not now going to occur until, at the very earliest, Friday morning,” he said.

People before Profit TD Bríd Smith claimed Dublin Bus workers will vote overwhelmingly for strike action in solidarity with their colleagues in Bus Éireann. She told The Irish Times that the full result of the ballot will not be known until Thursday morning, but the trend was heavily towards strike action. She is a former driver and bus conductor with Dublin Bus and NBRU official.

No strike action can take place on foot of the ballot for at least seven days by which time the Bus Éireann dispute may be resolved.