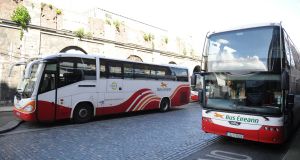 A spokeswoman for Bus Éireann said the majority of the company’s city buses had special protective screens that form part of the driver cab. Photograph: Aidan Crawley

A number of Bus Éireann drivers are on sick leave following serious assaults, including an incident at Busáras in Dublin where a man threw a bottle at a bus and then severely beat the driver, leaving him concussed and with fractured fingers.

In another incident in Co Kildare, a passenger allegedly “beat the head” off a driver after he offered €3 to cover the €10 fare to Dublin and then refused to get off the bus. Four passengers restrained the man and his hands were tied with duct tape before gardaí arrived.

A driver in Co Meath was attacked by a passenger carrying fake documentation after he was refused travel early last month, according to Stephen Nugent, the National Bus and Rail Union’s (NBRU’s) national executive representative for Bus Éireann.

Mr Nugent said there had also been five robberies on Bus Éireann drivers in recent weeks. In some cases, drivers finishing their shifts at the Broadstone depot in Dublin were being attacked and robbed of the cash they were carrying.

The NBRU has asked the company to retrofit the bus fleet with safety screens for the protection of drivers, but it acknowledges that this is likely to be a considerable cost. The union wrote to the company at the end of October reminding it of its statutory duty to ensure staff had a safe place of work and it said the increase in physical assaults had become “intolerable”.

Mr Nugent has called for the introduction of a scheme for drivers on leave following assaults to ensure their wages were not reduced, similar to a scheme that exists in Dublin Bus.

Following up the matter in the Dáil, Independent TD Joan Collins asked Minister for Transport Shane Ross if the immediate installation of assault screens on all Bus Éireann services would be ensured and if his “initial positive response” to the union would be followed up.

Ms Collins said there had been “1,000 acts of anti-social behaviour” against Bus Éireann drivers in the past 18 months and she asked Mr Ross when a Garda transport division would be established.

The Minister said he had written to the Rail Safety Advisory Council, which had recommended the establishment of a dedicated unit of An Garda Síochána to police the rail network on occasions when the possibility of anti-social behaviour was high.

But he said Bus Éireann had reported that the level of anti-social behaviour was “relatively low and noted a declining trend”.

It is our experience that most anti-social behaviour occurs in city locations, from late evening onwards

“That does not make it acceptable for one second. However, the rate does seem to be coming down.”

A spokeswoman for Bus Éireann said the number of recorded incidents of anti-social behaviour or assaults on drivers, or passengers, was “low” across the nationwide network.

“It is our experience that most anti-social behaviour occurs in city locations, from late evening onwards. Stone-throwing incidents [at moving buses] make up most of these, and mainly occur in Cork and Limerick,” she added.

“We suspend or divert services when such incidents occur, and advise gardaí, to ensure the safety of our staff and passengers.”

The spokeswoman said the majority of the company’s city buses had special protective screens that form part of the driver cab and that all the Bus Éireann road passenger fleet had CCTV cameras.

The company said, in some of its large bus stations, it used an external security company “to support company staff, and ensure a safe environment for customers”.

“The current level of anti-social behaviour on Bus Éireann services at this current time does not – we believe – warrant a special sectoral police force on board our national network,” the spokeswoman added.