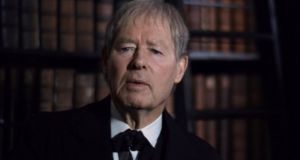 Retired broadcaster Mícheál Ó Muircheartaigh has made his acting debut at the age of 84.

Mr Ó Muircheartaigh plays a fellow Kerryman Maurice Shea who was the last survivor of the Battle of Waterloo. He features in the TG4 docudrama Waterloo: Na Laochra Gael to be broadcast on Thursday evening.

Thursday marks the bicentenary of the Battle of Waterloo which occurred on June 18th, 1815 and was the most decisive battle of the 19th century. It marked the final defeat of Napoleon Bonaparte and ushered in a century of relative peace in Europe which lasted until the outbreak of the First World War.

Maurice Shea was born in 1794 in Knockanure, Co Kerry. He joined the 73rd Regiment of Foot and wrote a vivid account of the Battle of Waterloo a year after it ended.

His account focuses on how the Duke of Wellington’s infantry formed squares and resisted the repeated cavalry charges of the French despite horrendous losses on both sides.

After the battle Maurice Shea returned to Ireland, but he and his family emigrated during Black ‘47 on a coffin ship to Canada. During the voyage four of his six children perished, but he lived on to the age of 97 in Quebec. When he died newspapers in Canada paid tribute.

Mr Ó Muircheartaigh was approached by the director Ruán Mangan director of the docudrama to take part. He agreed after reading the script.

“Anything with history in it is of interest to everybody,” Mr Ó Muircheartaigh said. “I was always interested in Napoleon because of his connection to Munster. He bought his horses in Buttevant. He was the type of character who was universal.”

Mr Ó Muircheartaigh said from the account that he read, he believes Maurice Shea must have been a native Irish speaker as were many of the Irish soldiers who fought at the Battle of Waterloo.

The documentary features a recruiting poster in Irish from 1806 setting out terms and conditions for joining the British army.

The British became heavily dependent on Irish manpower to fill up its ranks during the 19th century. It is estimated that 30 per cent of the Duke of Wellington’s soldiers at the Battle of Waterloo were Irish.

The Duke of Wellington is played by another familiar figure, Steve Wall from the successful band The Stunning.

The 80 minute docudrama is a co-production between independent filmmakers Tile Films and Scotland’s Caledonia TV. The two companies renew the successful co-production partnership behind the recent, highly docudrama After Braveheart (RTÉ / BBC, 2015).

It focuses on the Scottish and Irish contingents at the Battle of Waterloo who made up half of Wellington’s army.

The story is told through the individual accounts of those who were there and even wives who witnessed the battle.

Mr Magan said: “The first-hand accounts show that these men and women were unusually brave. From Lizzie McMullen’s rescue of her wounded husband, to Muiris Ó Sé’s poignant recollections, these are riveting stories and I was glad to have the opportunity to bring them to life”.

Producer Stephen Rooke was similarly enthusiastic: “I was astounded to learn that there were so many Irish and Scots at Waterloo. We knew this could be an amazing documentary.”

Waterloo: Na Laochra Gael will be broadcast at 8pm on Thursday evening on TG4.