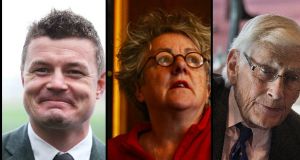 The honorary fellowship is awarded to world leaders in science or those who have made an exceptional contribution to society.

O’Driscoll is the highest try scorer in Irish rugby and among the highest all-time scoring centres internationally.

Séamus Mallon served as deputy first minister of Northern Ireland from 1998 to 2001 and was the deputy leader of the SDLP from 1979 to 2001. Mr Mallon was an important figure in the Northern peace process and served as a member of Seanad Éireann briefly in 1982.

Garry Hynes is a renowned theatre director and a Tony award winner.

Prof David Galloway, president of the Royal College of Physicians and Surgeons in Glasgow also received an honorary award.

Speaking at the conferring ceremony, Prof Frank Murray, president of the RCPI said: “We are delighted to honour Brian O’Driscoll, Séamus Mallon and Garry Hynes for their contribution to our lives here in Ireland. They have played key roles in Irish society – in politics, sports and the arts.”