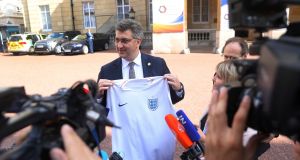 Croatia’s prime minister Andrej Plenkovic: said it is “especially important” for Croatia “ to completely understand” all of Ireland’s concerns about the Border. Photograph: Simon Dawson/Reuters

Croatia wants a final Brexit deal between the European Union and the United Kingdom that “suits the interests of Ireland”, Croatian prime minister Andrej Plenkovic has said.

The declaration came following a meeting in Zagreb with Taoiseach Leo Varadkar, which was dominated by talks about Brexit. Mr Plenkovic described Brexit as “a lose-lose-lose situation” for all parties.

Speaking to reporters, the Croatian leader said it is “especially important” for Croatia “ to completely understand” all of Ireland’s concerns about the Border in the Brexit negotiations.

We both look forward to a deep and comprehensive future new relationship with the United Kingdom, but that will take many years

“It is in the interest of Croatia that negotiations on [the UK’s] leaving the EU are completed in a way that will suit the interests of Ireland and all good that was done in the last 20 years after reaching the Good Friday Agreement,” he added.

“We both look forward to a deep and comprehensive future new relationship with the United Kingdom, but that will take many years,” said Mr Varadkar.

He went on: “I think everyone understands Ireland’s position when it comes to putting a physical border, a hard border . . . I think we need to avoid that, first of all, through the withdrawal treaty.”

Mr Plenkovic said that the UK’s withdrawal from the EU is “a lose-lose-lose situation” from the very beginning: for the former British prime minister David Cameron, the UK and the European project.

“Our position is that, in this process that is ahead of us, we must agree upon the withdrawal of the UK and get a clear picture of the future agreement and relationship with the UK,” he said.

“Our goal, and this is where we agree with the Taoiseach, is that the future [border] regime doesn’t result in any political destabilisation in Northern Ireland,” he said, following two hours of talks.

Currently, the total trade between the two countries is approximately €100 million, though both leaders expressed hopes for significant increases – partly on the back of ties to be developed in 2020 when Galway and Rijeka will both be European Capitals of Culture.

Congratulating Croatia on its World Cup performance, Mr Varadkar drew a parallel with Ireland’s performance in the 1990 World Cup in Italy, which had given “the country more self-confidence”, he told his Croatian counterpart.

The two leaders also discussed issues of EU budget, migration, security policy and climate change. Later during the day, Mr Varadkar met with Croatia’s president, Kolinda Grabar-Kitarovic, and chair of the Croatian parliament Gordan Jandrokovic, before travelling on to Romania.

On Tuesday, he will meet with the president of Romania, Klaus Iohannis, and the prime minister, Viorica Dãncilã. Later, he will travel on to Italy.