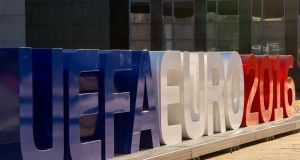 The city of Bordeaux intends to send out a “bienvenue” to Irish football fans next summer, French officials have promised.

Ireland play Belgium in Bordeaux on June 18th in the European championships. The stadium has a capacity of only 42,000 and demand for tickets will far exceed supply.

There have been 275,000 applications from Irish fans for the Euro 2016 finals and Belgium will bring also bring a large travelling contingent.

A delegation from Bordeaux, including the deputy mayor Stephan Delaux, attended a promotional event in the French Embassy in Dublin last night.

French ambassador Jean Pierre Thébault described Bordeaux as the “most Irish city in France” particularly in the era of the “wild geese” emigrants who fled Ireland for France at the end of the 17th century. Some of these families became important players in the wine trade.

James Napper Tandy, one of the leaders of the United Irishmen, fled to Bordeaux after the failure of the 1798 rebellion.

Mr Delaux assured Irish fans there were plenty of Irish bars and the second biggest fanzone at the championships with a capacity for 60,000 people.

The city has been transformed with a €5 billion facelift which has taken 20 years and was originated by the former Prime Minister of France Alain Juppé.

In response to suggestions that Bordeaux had very high hotel prices for the European championships, Mr Delaux said there would be plenty of accommodation in towns surrounding Bordeaux.

Bordeaux will open its monumental Cité du Vin in time for the European championships. It will be the largest permanent exhibition place solely devoted to wine.

For fans staying on in the area, the Bordeaux Wine Festival takes place between June 23rd and June 26th.

Mr Delaux said there was no point in asking local people for tickets for the match against Belgium as they were only getting 500 per match.