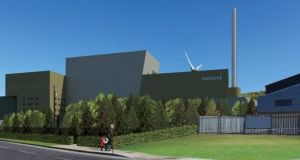 An artist’s interpretation of a planned incinerator in Cork

An Bord Pleanála has confirmed it has set a new date for a decision on whether to grant planning permission for a €160 million municipal and hazardous waste incinerator in Cork Harbour following an oral hearing into the project last year.

The board was due to give a decision on the planning application under by Indaver Ireland for the incinerator in Ringaskiddy on January 24th, but deferred it for a third time. The new deadline is March 22nd.

The news comes days after the board was criticised by the Ringaskiddy & District Residents Association  for deferring the decision for a third time, with the group accusing An Bord Pleanála of only adding to people’s anxiety by postponing its decision until March  22nd.*

A spokesman for the association said the local community had been battling the incinerator plan for some 16 years and was both financially and mentally drained “over the uncertainty of a decision that would change their lives”.

He said the fact that Indaver had made an error in its submissions on dioxin levels at the oral hearing should have made it an easy decision for Bord Pleanála but seven months on, the local community is still having to live with uncertainty for another two months.

“The mental health and wellbeing of residents of Ringaskiddy and Lower Harbour communities is being demoralised by the board’s inability to competently achieve their role as a quasi-judicial body, and their powers and procedures should be questioned,” said the spokesman.

Contacted about the concerns raised by the residents’ association, a spokesman for the board declined to comment, other than to repeat its position when confirming the most recent deferral, that “the case has not yet reached the closing stages”.