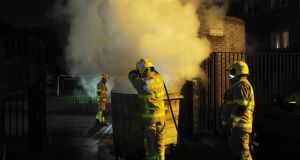 Almost 50 bonfires, multiple chest pains, numerous falls and head injuries, one head-on collision between a taxi and a car which fled the scene and an exotic bird trapped in a burning log cabin were among the incidents dealt with by Dublin Fire Brigade on this year’s Halloween eve.

The bird is the first thing on the menu when The Irish Times walks through the doors of the Tara St headquarters of the Dublin Fire Brigade just ahead of its busiest night of the year.

A small fire has broken out in a wooden extension attached to a home on Dublin’s northside and when the fire crew arrive they are told by the agitated homeowner that there is “a rare canary” trapped in the structure.

Undaunted the crew go in and the unharmed, if slightly smoked, bird is saved and returned to the distraught hands of its owner within moments, allowing the crew to return to the normal business of an evening like this.

The nine team unit in the 999 call centre dispatches crews all over the city with calm efficiency. There is a 17-year-old in Temple Bar with a dislocated shoulder and a baby struggling to breath in Dublin 11. There is a man receiving CPR at a city centre hostel and someone has overdosed on the North Circular Rd.

These are all the bread and butter calls handled by the paramedics and the fire fighters working with the Dublin Fire Brigade, but in the hours ahead much of their focus will be diverted elsewhere.

Their main job tonight and in the days ahead will be putting out bonfires or making sure they burn safely.

In just four hours on Wednesday night, crews were dispatched to 48 different fires across the city, which is a fraction of the 300 or so they expect to handle on Halloween itself.

Every time they go out the drill is much the same and the first job they do is risk assessment. It is not, however, the level of danger posed by flames that crews are assessing but the threat posed by the groups of young men watching the fires burn.

“The fires are almost always very manageable,” says Derek Cheevers, the district fire officer on duty in Tara St over the Halloween period. “The real danger we face are the gangs.”

A paramedic on his team was hospitalised days earlier after an assault by “a fella who was under the influence of drink and whatever else” and it served as a timely reminder that on weeks like this, the most hazardous thing the people working in this most hazardous role have to contend with, are other people.

With that in mind his crews always do an instant “risk benefit analysis” when they arrive at a fire scene. “If the fire is on open ground and not threatening life or property then often the best course of action is not to take any action for the safety of fire fighters,” Cheevers says.

“If a fire is open ground we take a pragmatic approach. We have limited resources both in terms of crews and equipment so we have to pick our battles carefully to ensure first that are firefighters are safe and second that our fire tenders are kept on the road. But if we need to put something out and it is surrounded by a gang then it’s a no-brainer, we call the guards,” he stresses.

As he talks and drives his support vehicle at speed through the city centre his radio crackles into life and he hears that crews in Tallaght and Finglas are at the scenes of separate bonfires but are “taking no action” because the potential for violence is too great.

A light drizzle starts to fall. Heavier rain and wind are forecast for Halloween. That must be good news for the fire fighters?

Not so much, says Cheevers.

“Unfortunately the rain doesn’t really make that much difference because people are going to light their bonfires anyway.”

“Sometimes it actually makes things worse because when the material for the fire is wet, people use accelerants which can create really serious problems. They don’t realise that when they are using something like petrol they can easily cover themselves in a mist of fuel which can set alight extremely quickly. And of course the wind comes with its own problems because it blows embers further distances.”

In Cheevers’s mind, the only good thing about wet and windy conditions is that they stop people hanging around bonfires boozing late into the night which means the real madness - which starts at around 4.30pm just as darkness falls - tends to finish earlier.

In recent years, Halloween related calls have been starting earlier. Dublin Fire Brigade has received more than 3,000 calls in the last week with the control centre logging 331 fires from October 21st until October 28th.

Among the largest and most disruptive was a blaze in a derelict property on Clanbrassil Street Upper in Dublin 8 on Tuesday evening. That was a fire which had “huge potential to spread,” Cheevers says. “It was a very hazardous situation and we had to close the road at 4.30pm which caused huge traffic disruption.”

He says that while a Garda investigation into the cause is ongoing, it seems probable that stockpiles of bonfire material belonging to one gang in the area was torched by a rival gang.

The radio crackles again. There is a report of a factory on fire in Drimnagh. The flames are coming through the roof, the dispatcher says and two ambulances based in Dolphin’s Barn and one from Tallaght are sent to the scene.

Cheevers was en route to a bonfire in Finglas but he learns from the first responders at the scene that it is “going nowhere and there is a large crowd around it so there is no action to be taken,” so he turns his support vehicle around and heads south of the river.

What initially sounded like a significant incident turned out to be a few pallets on fire at the back of a disused warehouse. “Sometimes people see the flames and the smoke and they assume that it’s a building on fire,” he says as he diverts to another blaze in a flat complex in Bluebell.

A handful of teenagers on bikes scowl at the fire fighters tackling that fire but do no more than that and it is extinguished in 60 seconds.

Things are not always so easy and Cheevers says he anticipates a lot of burns and blast injuries in the hours ahead. “Each year we see horrific injuries to people and to pets, I mean it’s just horrible,” he pauses again. “And just so unnecessary.”

There is an report of an accident on North King Street in Dublin 7 and one of the drivers has fled the scene.

There is a badly damaged car in the middle of the road with all its airbags deployed. Half a dozen gardaí are on the scene diverting traffic, taking measurements and seeking out witnesses.

The distraught driver is sitting on the footpath with his head in his hands He is being treated by Dublin Fire Brigade for chest injuries but the loss of his means of income for weeks, not to mention the likelihood that his insurance premiums will skyrocket as a result of the crash, is of most concern.

Dublin City Council street cleaners who happened to be passing are already sweeping up the debris so the road can be opened.

One of them leans briefly on his brush.

“That poor f**ker was only trying to earn a living, looking to earn a few bob and this happens. And then the clown in the car just drove off. They were probably drunk or the car was probably stolen,” he muses. “There are some awful eejits out there.”