‘I’ve been trying to think of something positive about the vote but I can’t. It’s bad news’ 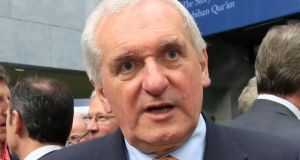 Former taoiseach Bertie Ahern said every independent international body who made a statement on this in the last five months said this was ‘bad for Europe, bad for Britain and, by extension, bad for us’. Photograph: The Irish Times

Former taoiseach Bertie Ahern said he is bitterly disappointed with the Brexit result which he says is bad news for Ireland.

“I’ve been trying to think of something positive about the vote but I can’t. I’m bitterly disappointed.

“Every independent international body who made a statement on this in the last five months said this was bad for Europe, bad for Britain and, by extension, bad for us.”

Speaking on the Pat Kenny Show on Newstalk he said Britain and Ireland now faced major challenges following the outcome of the vote.

“In the North specifically it will lead to more uncertainty. I can’t get around how it will work for agriculture in the north because they, like us, export most of their produce.

“Down the road there’s the whole question of tariffs, I know Boris (Johnson) thinks he’ll get everything he wants. Ok, good luck, but that’s not going to happen. There’s a whole lot of imponderables.”

On the issue of the resignation of British prime minister David Cameron Mr Ahern said the leader of the Conservative party had no other possible course of action.

“Cameron had no option. He wasn’t going to stay around to implement something he completely didn’t agree with.”

Mr Ahern also raised the prospect of the UK reinstating Border controls between Northern Ireland and the Republic.

“Theresa Villiers says we’ve had an agreement since 1921 for people from the Republic to come north.

“That’s true. But what she never says is if EU citizens, or non-EU citizens, come illegally in here, if people target us, the first thing Boris Johnson and his friends will say is ‘we have to do something about the land border’.”

Former Fianna Fáil minister Martin Mansergh says that the EU will not want to make it too easy for the UK to leave.

He said he was dismayed by the Brexit result. “We will have to ensure that this is not a disadvantage to Ireland.

“We will have to pick up the pieces and reconstruct the equilibrium in relations between the Republic and the North, between Ireland and the UK and between the UK and the EU.

“People will have to try to minimize the damage. We have to be on top of this all the way.”

He said the result will not be good for Northern Ireland.

“The electorate would have referred to stay. They voted 56 per cent to stay, 44 per cent to go.

“This isn’t the time to highlight contentious issues. Even the Scots - and they too voted to leave - are being cautious.”

Responding to a question about Sinn Fein’s call for a Border poll, he replied: “The conditions just aren’t there now for a united Ireland.”

He also dismissed allegations that illegal immigrants would try to get into the UK through Ireland.

“I wouldn’t worry about the immigration aspect.”

However, he would be concerned about tariffs on good crossing the border. “There must be some way of managing that without Border posts. There are no border posts between Norway and Sweden so it is possible.”