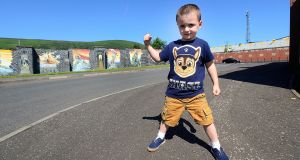 “It’s brilliant, like a whole new world,” says Gerard Frame, looking out of the window of his Ardoyne home across the Crumlin Road to Holy Cross in north Belfast.

“Since the wall came away, it gives you a sense of civilisation, of what you had never seen”.

The 2.5m-high brick peace wall, built 30 years ago, made them feel safe, and he admits he and his wife Ellen were apprehensive when the Housing Executive first proposed the changes. During five years of residents’ meetings, they were persuaded.

“Now, if someone wants to chuck a stone, we can see them,” he says. A year ago, a cheerful Martin McGuinness visited to celebrate the removal of a 300m stretch of wall, which has been replaced with railings and a landscaped path.

Since then, McGuinness has died, Stormont has collapsed, the Democratic Unionist Party and Sinn Féin has emerged triumphant after Westminster elections and the DUP now holds significant power inside the gates of Downing Street.

Despite the turbulence, there has been slow but steady, visible and less visible progress at street level regarding peace walls, even though the target of getting rid of all of them by 2023 seems impossible for now.

A recent study lists 116 gates, walls and fences in Belfast, Derry and elsewhere in Northern Ireland, though the Northern Executive only acknowledges 50 of them – the ones owned and maintained by the Department of Justice.

Others belong to the Housing Executive and a number of private landowners. For now, attention has shifted from the long-term goal of physically removing all walls to transforming attitudes and the blighted post-conflict cityscape of north, west and east Belfast.

There is more awareness of the length of time and the complexity involved in removing a peace wall. It is now all, says Jennifer Hawthorne of the Housing Executive, about seeing the interfaces and the spaces around them through a regeneration lens.

A corridor of regeneration now stretches from Carlisle Circus, close to the city centre, where Carlisle Memorial Methodist Church has recently been reopened for community use, past Crumlin Road Gaol, currently TripAdvisor’s number one Belfast visitor attraction, up to Holy Cross church, where the listed former boys’ primary school has been transformed into the Houben Centre.

In the autumn, a gate across Columbia Street will be opened and another peace wall transformed.

Last year, the Twaddell loyalist protest camp was dismantled. Perhaps the greatest symbolic sign of hope is the purchase of the massive crumbling Courthouse for conversion into a luxury hotel.

Behind Crumlin Road Gaol, extensive security fencing has been removed from the old Girdwood Barracks site, now occupied by a community hub and social housing. Nearby, the stunning Carnegie Oldpark library, closed seven years ago and fallen into disrepair, has been bought by businessman Quintin Oliver for £90,000.

He was brought to the auction by local resident and community worker Janice Beggs, who worked at the library as a youth worker during the 1990s and has now won the Royal Institute of Chartered Surveyors Sheila McKechnie Award for “local campaigner of the year”.

This summer, a £1 million campaign to restore the library will start. Beggs, who helps to lead the Lower Oldpark Community Association, is passionate about bringing this “forgotten and derelict” area of Lower Oldpark back to life after “40 years of deprivation”.

Cut off from Cliftonville by a forbidding wall across Manor Street, it now has 26 refurbished and seven new houses. Many others are having more minor repairs carried out on them.

Across Belfast, there are signs of change. The grim peace wall at Sliabh Dubh estate, opposite an old sanger on the Springfield Road interface, was scarred with graffiti. Now, it is filled with vibrant Wonderwoman and Spiderman cartoon images that attract young people wanting “selfies”.

Further down the Springfield Road, the old military Workman Gate has been replaced by ornamental see-through gates. Waste ground between Skegoneill and Glandore Avenues in north Belfast has become Peaspark, a community vegetable plot and garden started four years ago.

Fifteen regular volunteers lead the project, but many more help at busy times. Twenty years of work has brought change. This year, for example, the lampposts are missing the usual July profusion of loyalist flags.

Smart new cross-community centres, such as Skainos and Duncairn Community Arts have sprung up across Belfast, intentionally designed to welcome both communities, and indeed from the city’s burgeoning ethnic minorities.

In west Belfast, the new Innovation Factory offers space for small businesses to get off the ground, complete, though, with separate entrances from the nationalist Springfield Road and the unionist Workman Avenue.

One of the pioneer tenants, James Johnston says it is “Ireland as it should be”, a vibrant, dynamic community filled with the young, where “historical, cultural and political issues don’t get discussed at all”.

Each wall has its own history and its reason for being, so support for the removal of any must be secured from locals, For many, the disappearance of the walls is a significant risk, not an opportunity.

So far, the International Fund for Ireland has invested more than £4 million to fund eight projects in Belfast and Derry that have the removals of the walls at their heart, along with community-building measures.

Two years ago, the Fresh Start Agreement included £60 million over five years to support “confidence and relationship-building activities” that would build the conditions that would eventually allow for the removal of peace walls.

Change involves many parties, including the Department of Justice and the Housing Executive. The Police Service of Northern Ireland must make security assessments. The Departments for Roads and Transport have to be involved, too.

Five years ago, when the peace walls programme began, Adrian Johnston, chair of the International Fund for Ireland, says security was the priority for people, who felt they were being asked to remove their “safety blanket”.

Communities were helped to move forward “at their own pace”, he says. Now he believes that the locals are ahead of State agencies, who can be slow to provide funding and the necessary co-operation for changes to be made.

“The peace walls are the epicentre, iconic and visible, of the peace process,” he goes on, though many others believe that the lack of an executive and a minister for justice and a functioning Assembly has created a leadership vacuum.

The removal of barriers has led to violent incidents. There is anecdotal and statistical evidence of a significant drop in levels of crime and anti-social behaviour in the places where the walls used to be over the last few years.

Community workers previously nervous at trumpeting changes for fear of setting off a backlash are now keen to promote successes, including Ciarán Shannon of Duncairn Community Partnership in north Belfast.

Six pedestrian gates on Duncairn Gardens and the gate that cuts Alexandra Park into two are now open all day and an outdoor classroom will be created in the nearby park once 30m of security fencing are taken away.

New housing in New Lodge and Tigers Bay including a mixed development of 22 properties has been completed. It is all down to relationships, says Shannon, which are now so strong there is no longer any fear of a descent into violence.

Owens would like to see all peace walls come down. In the meantime, he wants to contribute to the “peace walls cause” by offering cut-price rates for people living in other peace wall areas to see parts of Belfast they might not otherwise see.

Meanwhile, artists have become interested in the walls. Artist-architect James O’Leary, originally from Cork and now London-based, became fascinated with the peace walls and engages in “graphic agitation” from his Twitter account @Inter_Arch.

Fearghal Murray and Gareth McMahon of MMAS Architects, based in Conway Mill, west Belfast, entered a Beyond Borders Royal Institute of British Architects competition and are among the four selected for a London exhibition.

They designed imaginary gates, opening into landscaped space in a section of the Cupar Way wall, while RIBA gave them funding to facilitate discussions with a group of young women from one of the communities.

Initially hesitant, they became enthusiastic and creative, allowing Fearghal and Gareth to visualise the replacement of the wall with a treetop walkway and treehouses, a pond with a bridge, vegetable plots and Masterchef-style kitchen stations.

Challenges remain, however: the multiple ugly fortified gates obstructing side roads; walls snaking between back gardens; swathes of derelict land across north Belfast; the enduring sinister presence and criminal activity of former paramilitaries.

As a nine-year old living in the lower Shankill, one local woman remembers the burning of Bombay Street and the day a bus was brought to block the road. She never saw her Catholic friends again. She still asks for them sometimes.

Today, she finds it hard to accept that improvements have happened in the last two decades. Lower Oldpark is, she says, a “forgotten area” and “anything we are getting is very slow”. She fears for the young people going across to Girdwood Hub.

Vicky Cosstick is the author of Belfast: Toward a City without Walls (Colourpoint, 2015)