Belfast Mass held for Nóra hours before body is found 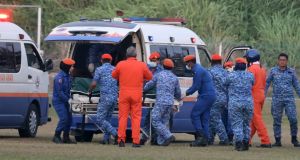 The body of 15-year-old Nóra Quoirin is brought into a ambulance in Seremban, Malaysia. Photograph: Reuters/Lim Huey Teng

“Hearts are filled with pain,” a priest told a Mass held in Belfast for missing Irish teenager Nóra Quoirin just hours before her body was found.

The 15-year-old’s remains were discovered by Malaysian police in a rainforest on Tuesday. She had been missing for 10 days.

The daughter of a Belfast mother and a French father, Nóra lived in London but had been baptised in St Brigid’s church in south Belfast, where her grandparents are parishioners.

They and other family members, as well as close friends and colleagues, were among about 200 people who attended the Mass in St Brigid’s on Tuesday morning to pray for her safe return.

One parishioner said the loss of Nóra had been “very personal” for people in Belfast.

“We had kept hoping,” he said, “and then we heard the news that a body had been found just after Mass.

“Everyone was very shocked, and saddened.

Fr Marcus Holden, of St Bede’s church in Clapham Park in London, where the Quoirin family live, said a vigil of prayer and reflection would be held for Nóra on Wednesday, and a public Mass on Thursday.

“We now keep the repose of Nóra’s soul in our prayers, confident that she is in the safe hands of our father in heaven,” he said on Twitter.

“We also pray for her family at this time of profound tragedy.”

In his homily at the Mass for Nóra in Belfast on Tuesday morning, Father Eddie O’Donnell said Nóra had been baptised in the church in 2004, and was “a child of our faith community”.

He said Nóra and her family were held in their prayers.

“Hearts are filled with pain,” he said, “but we realise that the sum total of all our pain does not even begin to approximate the pain of Nóra’s mum and dad, Meabh and Sebastien, and that of her grandparents, and those of the immediate family circle.”

In a statement read out at the Mass, the Bishop of Down and Connor, Noel Treanor, said Nóra and her family had been “very much in my thoughts and prayers”.

He commended the “courage, faith, hope and resolve” of the Quoirin-Agnew family, and said he was “mindful of the goodwill and commitment of the authorities and local community in Malaysia”.

A spokesman for the Diocese of Down and Connor said the thoughts and prayers of all were with the Quoirin family at this “desperately difficult” time.

“News that Nora’s body has been found is heart-breaking confirmation of her family’s worst fears,” she said.

“It is a devastating tragedy for Nora’s family and friends and our thoughts are with her loved ones and all those who helped in the search operation over the past nine days.”